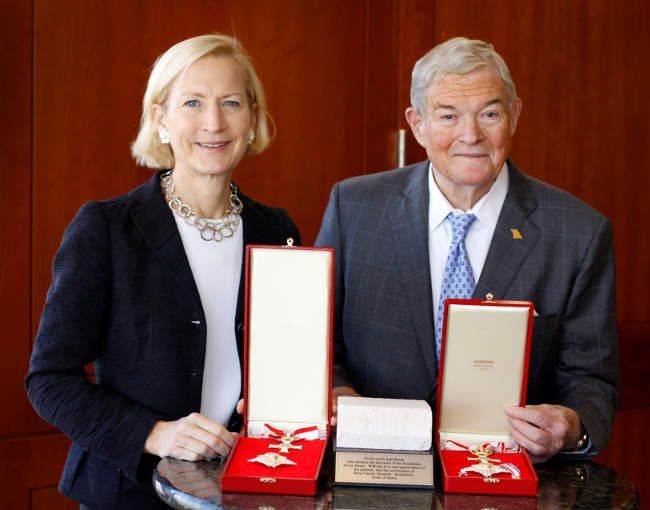 Former U.S. Senator Christopher S. “Kit” Bond was recognized today by the Sovereign Military Hospitaller Order of St. John of Jerusalem of Rhodes and of Malta (“Order of Malta”) for his national leadership in improving and expanding the Holy Land’s primary hospital for women and infant children, Holy Family Hospital, based in Bethlehem.

Senator Bond was honored for leading bipartisan efforts in 2005 to forge an important partnership between the U.S. Agency for International Development (USAID) with Holy Family Hospital. This partnership has led to the USAID providing $6.4 million for critical improvements and quality maternal and child health services — especially for high-risk pregnancies and newborns — at Holy Family Hospital. Because of Senator Bond’s leadership, the USAID’s vital assistance has allowed Holy Family Hospital to advance its mission of providing world-class medical care for women and infant children, regardless of nationality, religious affiliation, or ability to pay. Throughout his distinguished career, Senator Bond championed policies to help the most vulnerable, from Smart Power projects overseas through the Peace Corps, USAID, and the Millennium Challenge Corporation, to projects here at home like expanding Community Health Centers and reforming homelessness programs.

“It is an honor to accept today’s award, but the real honor is due to the Order of Malta and the Holy Family Hospital staff who provide quality health care to mothers and babies in the West Bank and who have created a beacon of hope in this conflict-stricken region,” Bond said.

Senator Bond was presented with one of the Order’s highest recognition of laypeople, the Cross of Grand Officer “Pro Merito Melitensi” of the Order of Malta. Established in 1920, the award is a knightly order of merit and has been given to esteemed individuals in recognition of their service on behalf of the poor and the sick. Previous conferees include President Ronald Reagan, who was honored during his second term in the White House, and President George H.W. Bush, who was honored after he left public office.

Ellen Schlafly Shafer said, “We are deeply gratified for Senator Bond’s support and are very pleased that he has been recognized for his leadership. Senator Bond’s efforts helped improve maternal health and child care in the Holy Land have made a genuine difference in the lives of countless families. His work in this area should be a model and inspiration for other public servants.”

Jack Pohrer said, “The Order of Malta is very proud to recognize Senator Bond with one of its highest awards for his commitment to helping improve Holy Family Hospital’s facilities and services for mothers and infant children. Senator Bond’s leadership exemplifies the values that the Order of Malta seeks to uphold and inculcate throughout the world. Senator Bond is worthy to stand alongside Presidents Reagan and George H. W. Bush as recipients of one of the Order’s highest award.”