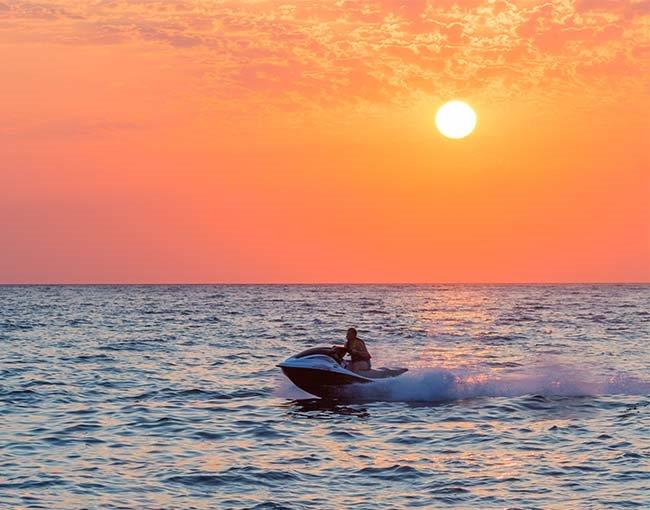 On May 27, 2022, a jury in Los Angeles returned a defense verdict for Yamaha in a wrongful death trial over the 2015 death of a man who was riding a Yamaha WaveRunner on the Colorado River. The jury instead assigned fault to the WaveRunner operator who struck the man and the rental company that provided the watercrafts, assessing $4.75 million in total damages against those defendants.

The plaintiffs, the Thabet family, traveled to Harrah's Hotel & Casino in Laughlin, Nevada, on Memorial Day weekend in 2015. They rented six Yamaha WaveRunner personal watercraft (“PWC”), and drove them south on the Colorado River. About an hour downstream, two of them collided. The lead PWC, on which Magdy Thabet (decedent) was the rear passenger, was struck from behind by a PWC operated by Thabet family friend, John Envieh.

Envieh claimed that when approaching the target PWC, he attempted to stop the forward travel of his craft by pressing the red “stop” (engine off) button, which disabled the craft’s steering, causing the accident. Envieh’s craft traveled up and over the target craft, knocking Thabet off, and landed on the opposite side. Magdy Thabet was life-flighted to a medical facility Las Vegas and died ten days later.

The plaintiffs brought a wrongful death suit against Yamaha, alleging design defect and failure to warn claims. Yamaha successfully moved to apply maritime law, due to the fact that the accident occurred on the Colorado River. The plaintiffs were the decedent’s five children and his wife.

The plaintiffs’ overriding theory was that all PWC should have deceleration devices or “brakes,” and that BRP’s Sea Doo craft had incorporated them since 2008. Plaintiffs further alleged that Yamaha models had “brakes”  starting in 2015; the year of the accident. Plaintiffs claimed that the lack of “brakes” on the subject PWC, a 2012 WaveRunner VX Sport, and the failure to warn that turning off the engine would disable steering, made the craft defective. The plaintiffs named four expert witnesses on their behalf (Dr. Craig Good, mechanical engineering, William Dobson, accident reconstruction, Dr. Edward Karnes, warnings, and Christopher Barry, naval architecture). Co-Defendant Envieh called Dr. Kenneth Solomon regarding warnings and accident reconstruction.

The plaintiffs asked the jury to award the Thabet family $45 million. The jury was out for approximately two hours. Ultimately, the jury concluded that the craft was reasonably safe. On the questions related to Yamaha’s liability the vote was either 12-0 or 11-1 in Yamaha’s favor. Co-Defendant Envieh was found 25% responsible and non-party Watercraft Adventures Rentals was found to be 75% responsible. Envieh had already entered into a high-low settlement agreement with the plaintiffs. The jury returned a verdict against Envieh and Watercraft Adventures Rental for $4.75 million in total.

The plaintiffs were represented by Lauri Brenner of Brenner Law and Donald Liddy of Liddy Law.

Yamaha was represented by Richard A. Mueller and Heather F. Counts of Thompson Coburn LLP and Dan Rodman of Snell & Wilmer.