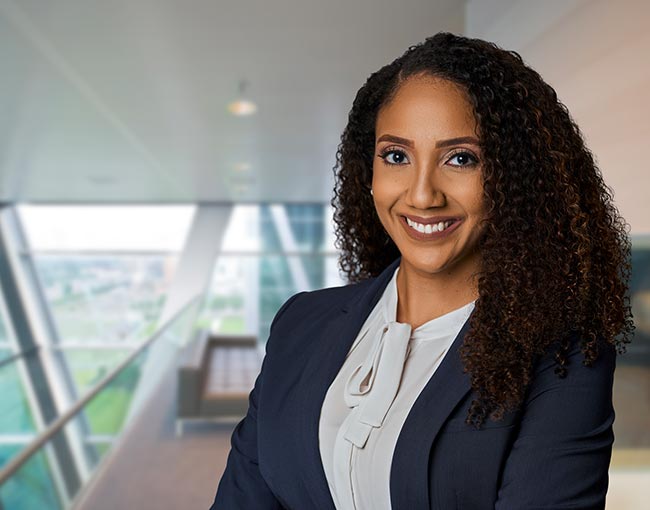 Jasmine is an experienced litigator who focuses her practice on high-stakes business litigation, employment law, and white collar criminal defense.

She helps clients in a range of industries respond to and manage civil disputes involving allegations of breach of contract, fraud, negligence, breach of fiduciary duty, and tortious interference with contracts and prospective business relations.

Drawing on her experience in government investigations and federal enforcement actions, Jasmine has guided clients through government investigations and litigation brought by the Department of Justice and the Securities and Exchange Commission involving allegations of consumer, health care, and securities fraud. She has helped corporate clients respond to state and federal False Claims Act qui tam actions.

In 2019, Jasmine was seconded to the Dallas District Attorney's Office to prosecute criminal cases as an assistant district attorney.

Before entering private practice, Jasmine served as a law clerk with the U.S. District Court for the Northern District of Texas and to the Chief Justice of the Supreme Court of Texas.

Represented a propane tank exchange company in state court lawsuit brought by a competitor alleging defamation, business disparagement, and tortious interference breach of contract claims, including successfully opposing a request for a temporary restraining order, resulting in a voluntary dismissal of all claims by opposing party.

Represented two former directors of an oil and gas exploration and production company in state court lawsuit brought by the company for fraudulent transfer and breach of fiduciary duty, resulting in voluntary dismissal of all claims with prejudice by plaintiff.

Represented a reorganized company in a fraud suit against former principals seeking recovery of over $90 million.

Represented the former office of a business-to-business financing company in a breach of contract action, including successfully arguing a motion to dismiss.

Represented an online travel company in a first-of-its kind qui tam lawsuit alleging violations of the Delaware False Claims Act for failure to escheat unredeemed gift card balances as unclaimed property, resulting in a favorable dismissal from the lawsuit.

Represented a major aeronautics defense contractor in defending claims of fraud and violations of the Federal Acquisition Regulation, resulting in a favorable dismissal of case.

Represented a global business solutions company in defense of EEOC and Texas Workforce Commission charges of age and disability discrimination, resulting in the dismissal of charges.

Represented a former officer of a dietary-supplement distribution company in a criminal fraud and misbranding prosecution brought by the Department of Justice.

Represented a prisoner in 42 U.S.C. § 1983 civil rights lawsuit alleging denial of medical care and use of excessive force in federal district court.

Better Together? Competition, Price Gouging and Other Antitrust Issues Raised by the COVID-19 Pandemic April 21, 2020

Are you ready for remote depositions? Adjusting to the new normal of litigation

How COVID-19 is likely to strain sports and entertainment partnerships