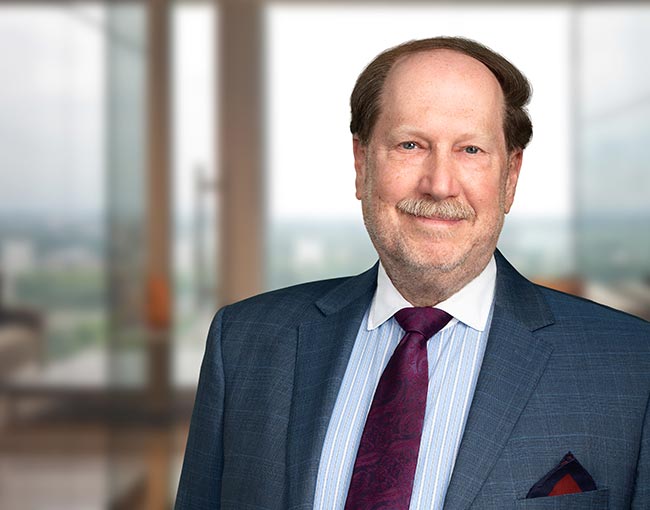 Steve also represents creditors and other committees, trustees, and other parties in bankruptcy proceedings; governments and companies in recovering costs for removal and abatement of asbestos; litigation funders and financing companies in enforcing funding agreements and obligations; and private equity firms and businesses in cybersecurity-related and right-to-privacy disputes and in international arbitrations.

Steve also led, in April 2020, a client-sponsored webinar, "The Upcoming Wave of COVID-19 Era Loan Defaults: Workouts and Insolvencies: A Guide to the Possibly Perplexed."

Representing lenders and others in lender liability mortgage foreclosure litigation involving over $120 million-plus in construction loan facilities to develop a residential tower in NYC's financial district. Recently won a contested motion to appoint a temporary receiver and defeated the borrower/guarantors' cross-motion to dismiss or stay the foreclosure action. (2020-present)

Representing private equity investment fund, obtained a favorable settlement with a brokerage firm that had allowed the unauthorized sale of securities valued at over $5 million, access to clients' accounts and transfers of assets to banks and others in the U.S. and elsewhere. (2020-present)

On behalf of a German bank, successfully resolved numerous claims and counterclaims exceeding $651 million arising from the issuance of credit default swaps and collateral obligations. (2014)

Represented a foreign-based bank in multiple litigations resulting in the issuance of a pre-judgment order of replevin and preliminary injunction, judgments of over $14 million and substantial recoveries and other relief. (2017)

Represented a professional services firm in multiple litigations and disputes, including challenges to professional fees in bankruptcy; enforcing and defending against non-compete, restrictive covenant and non-disparagement provisions; enforcing indemnification provisions, responding to third-party subpoenas, preparing witnesses for expert testimony, and assisting in preparation of valuation and forensic investigation reports. (2013-2018)

Won dismissal with prejudice, on behalf of three directors of a California-based off-road vehicle manufacturer and parts supplier, of an amended complaint seeking over $100 million in damages for breach of fiduciary duty and fraudulent transfers arising out of the corporate restructuring and UCC Article 9 sale of company assets. (2011)

While representing one of the country's largest investment banks and serving as lead counsel for a group of seven other lenders in the bankruptcy of a major diamond/gem retailer, won dismissal without leave to further re-plead a third amended complaint that sought over $129 million based upon fraudulent conveyance, preference and related theories. The dismissal, which was accompanied by a stay of discovery, was affirmed by the Southern District of New York and the Second Circuit in an appeal Steve argued. (2011)

Representing a large state government, obtained reversal of a bankruptcy court decision that granted summary judgment on statute of limitations grounds of that state's $130 million in claims against an asbestos manufacturer for the recovery of expenses of removing asbestos products from government-owned buildings. (2009)

Representing major commercial bank defrauded by borrower in a $120 million fraudulent borrowing base certificate scheme, obtained favorable settlement from the successor of a leading bank that acted as loan servicer after receiving favorable court rulings in New York and North Carolina courts. (2007-2008)

Represented lender in promissory note/lender liability litigation in three-week bifurcated jury trial that led to a Second Circuit opinion that enforced the notes, dismissed all borrower defenses and counterclaims, and resulted in a judgment in favor of the lender for over $12 million. (2000)

“The Upcoming Wave of COVID-19 Era Loan Defaults: Workouts and Insolvencies: A Guide to the Possibly Perplexed,”
Client Webinar, April 2020