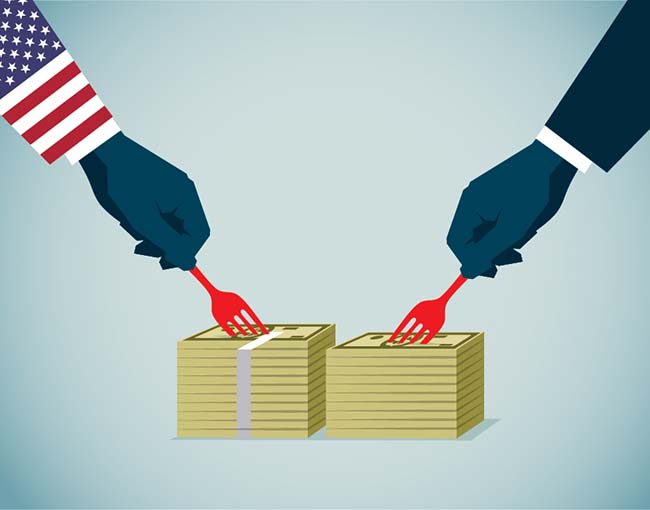 Congress, with its constitutional "power of the purse," directs federal spending. Congress created the President's Office of Management and Budget (OMB) and the Congressional Budget Office (CBO), among other entities, to help inform federal spending policy. Both offices "score" (or estimate) the net cost of legislation and budget proposals

PAYGO, or "Pay As You Go," first originated as a deal in 1990 between President George H.W. Bush and congressional Democrats to implement budget-friendly guardrails to limit increases to the federal deficit. At the time, PAYGO required any legislation that has a net cost (tax cuts or increased spending) to have a concurrent revenue offset (tax increase or reduced spending). In the wake of smaller deficits and then budget surpluses in the 1990s and less focus on budgetary restraint, the law expired in 2002.

Don't Let the Sun (PAY)Go Down on Me

With federal spending ballooning through the 2000s, House Democrats resuscitated PAYGO in 2007. The Democratic majority incorporated language into House rules prohibiting the chamber from considering any legislation that increased the deficit without corresponding offsets, either through spending cuts or revenue increases. The Senate has had a similar rule since 1993. These restrictions can be waived with a simple majority in the House or 60 votes in the Senate.

In 2010, Congress passed and President Obama signed a new PAYGO law that reinstituted revenue-neutral taxing and spending. Though permanent (i.e., it doesn't automatically expire like the prior statutory iteration PAYGO), this legislation can be, and is often, waived by Congress with simple majorities in both chambers.

When Republicans took the House majority in 2011, they repealed House rules on PAYGO and replaced them with "CUTGO," which is similar in purpose but focuses on decreasing spending. One recent, notable law under which congressional Republicans waived PAYGO was the 2017 tax cut package.

Earlier this winter, House Democrats, back in the majority, passed a rules package that eliminated the Republicans' CUTGO rule and returned to their prior PAYGO rules. Some progressives within the House Democratic Caucus objected, arguing that liberal proposals such as "Medicare for All" could not be considered and that the rule was unnecessary. Despite this, there were ultimately only three defections by Democrats when voting on this change.