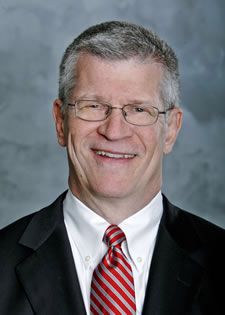 In the first episode of a two-part series, After the Buzzer host Bob Wallace is joined by Doug Elgin, who has acted as the Commissioner of the Missouri Valley Conference (MVC). Doug recently announced that after 33 years in this role, he would retire in June 2021. He also announced his successor, Jeff Jackson, who will join Bob on the next episode to discuss what is in store for the MVC under his direction.

During his tenure at the MVC, the second oldest conference in the country, Doug has made St. Louis a popular spot for various college tournaments, including the MVC basketball tournament and the NCAA basketball tournament for both men's and women’s basketball. In 2005, Doug, who served a term on the NCAA Men’s Basketball committee, played a major part in bringing the 2005 Final Four to St. Louis. In this interview, Doug, who is the longest-tenured Commissioner at a multisport conference, shares highlights of his collegiate athletics career and what he hopes to see his successor do following in his footsteps.

On the COVID impact on collegiate sports:

“From an economic standpoint, we saw a 68% reduction in our revenues last year. We were one of the last events in college basketball to play a year ago when the pandemic shut down American sports. This past season, our staff did a wonderful job with the COVID testing protocols and doing everything they could to keep our teams safe. We were the only conference in the country to play all of our conference men’s basketball games. All 90 games were played. Some were postponed, but we rescheduled them. We played 86 of our 90 women’s basketball games. What we did is we used a sequence in our games and we would go on the road to play two consecutive games with the same opponent. In fact, it cut our travel in half, basically.”

On changes in transfer regulations:

“Transfer regulations are changing. We anticipate that there will be a one-time transfer exception where a student-athlete at any institution can transfer to another institution and play immediately. There are positive and negative views of the transfer regulations, but I think we’re going to survive. I think we benefited more from transfers coming into our conference than we have those going out of it.”

“There are a lot of state legislatures that passed legislation that enables student-athletes to receive compensation for a variety of involvement with auto dealerships or with social media, or being a spokesperson for a particular product. I think the NCAA is doing the best they can to stay in front of that, to make regulations that are more natural and that don’t render different states to have different rules and have advantages or disadvantages in the recruiting process. It’s very complex.”