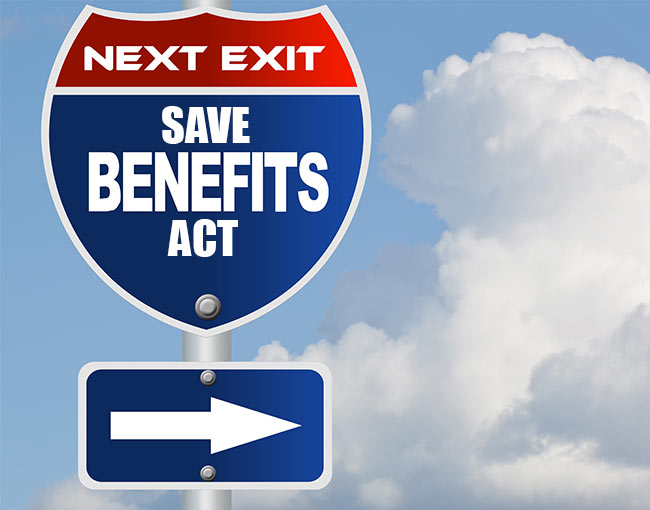 Get the basics on two federal bills affecting employee benefits

Recently, two bills with confusingly similar names were introduced in Congress. They are both worth mentioning regardless of whether or not they are ultimately enacted in their current form.

The SAVE Benefits Act

On November 5, Senator Elizabeth Warren introduced the “Seniors and Veterans Emergency Benefits Act” (also known as the “SAVE Benefits Act”). This bill was co-sponsored by 18 other Senators, including Bernie Sanders. The primary purpose of the bill is to provide a supplemental payment to Social Security beneficiaries and recipients of veterans benefits.

The press release issued by Senator Warren is worth reading. The opening sentence is as follows:

“CEO compensation for the top 350 U.S. firms increased by 3.9% last year — but this year, millions of people who rely on Social Security and critical veterans’ benefits won’t get any raise at all, for only the third time since 1975 [since there will not be a cost-of-living adjustment].”

So, the legislation proposes making a one-time emergency payment of (you guessed it) 3.9% (or $580) of the average annual Social Security benefit to the various beneficiaries of government programs.

More importantly for benefits practitioners, the bill proposes to pay for this benefit by closing corporate compensation “loopholes” (similar to legislation proposed by the House Republican Ways and Means Committee Chairman’s 2014 tax reform proposal). When comparable legislation is proposed by both parties, there would seem to be at least some chance of it becoming a law.

It is interesting that at a time when most institutional shareholder groups are advocating for more performance-based compensation, this legislation (as well as the impending SEC clawback rules) provides an incentive for public companies to move away from performance-based compensation. One final observation — is highly doubtful that large corporations will pay their executives less as a result of the legislation, nor will the executives be subject to any additional taxes. There could be some lost deductions, but for most large employers these will not be material.

On November 18, 2015, a bill was introduced in the House of Representatives that, despite the similar acronym to the legislation described above, is much more favorable to the employee benefits community. The full name of the legislation is the “Small Businesses Add Value for Employees Act of 2015” and it was sponsored by Representatives Ron Kind (D-WI) and Dave Reichert (R-WA). Given the bipartisan support, this bill is worth monitoring.

Highlights of the bill are as follows:

Lifetime income disclosure and safe harbor: While many of the provisions in the proposed legislation are aimed at smaller employers (not surprisingly, given the title of the legislation), the first few provisions have ramifications for all employers. First, a “lifetime income disclosure” statement would be required to be provided to defined contribution plan participants. Basically, the statement would, among other things, explain what the joint and survivor annuity provided by a plan participant’s account balance. The DOL would be required to issue a model statement and specify the actuarial assumptions. There is a provision to allow that plan fiduciaries will not incur liability with respect to the required notice. In addition, it includes a new safe harbor for qualified plans to encourage lifetime income options at retirement.

Limited transfer of unused balance in flexible spending arrangement: An amount up to $250 of unused FSA balances could be contributed to a qualified plan on a pre-tax basis.

Financial education: The various government agencies would be directed to develop retirement plan education materials for small businesses, as well as “age-appropriate curricula to be made available for financial literary education in element and secondary schools.”

Simple IRA/401(k) reform: The bill would eliminate the rule that limits the rollover of certain simple retirement account distributions to other simple retirement accounts. It would allow for simple salary reduction IRA plans to be terminated mid-year (subject to proration and the application of qualified plan limitations). The higher (25% versus 10%) penalty tax on certain early simple IRA distributions would be eliminated.

Automatic deferral IRAs: A new “automatic” deferral IRA would be established. Under this program, an employer could automatically enroll (subject to notice and opt-out rules) employees who made over $5,000 in the prior year into a payroll deduction IRA. While this program would not be subject to ERISA, the default investment rules of Section 404(c)(5) of ERISA would apply.

Secure deferral arrangements: Certain plans that satisfy the automatic deferral and escalation rules (as modified) would be deemed to satisfy the ADP test and certain adopting small employers would be eligible for a tax credit. The credit would be based on the total matching contribution made for non-highly compensated employees, subject to certain limitations.

Small employer plans: The bill would create a new deferral-only plan for eligible small employers (generally having no more than 100 employees who received over $5,000 in compensation). This new plan would need to generally satisfy the qualified automatic contribution rules and could not allow loans (and hardship withdrawals would need to be limited, under regulations to be developed). A model plan document would be published by the IRS.

Prior years compensation to count in determining maximum retirement savings deduction: Individuals who are allowed a deduction under Section 219 of the IRC would determine the deduction based on compensation for the current taxable year or the preceding taxable year. Presumably, the higher amount could be used.

Expand small employer pension plan startup cost credit: The tax credit in Section 45E of the IRC would be expanded to cover automatic deferral IRAs (and the credit amount could be increased to as much as $2,000).

Modification of ERISA rules for multiple employer plans: The bill would allow unrelated employers with less than 500 employees to participate in a single, pooled, plan. Special fiduciary duty rules would apply – it will be interesting to see how those rules develop.

If you have any questions about this topic, please contact Employee Benefits chair Lori Jones.

Question for the Record (QFR)