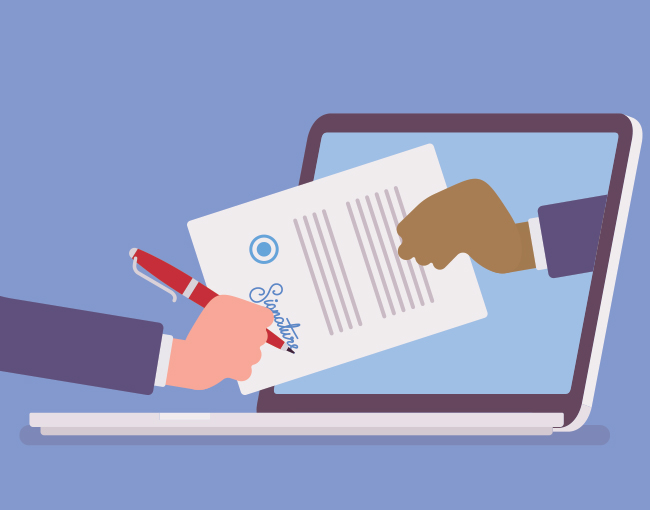 Due to the COVID-19 crisis, companies across the country are having to adjust, with many employees working remotely. This raises the question of whether documents executed by electronic signature are legally enforceable. The answer depends on facts, such as the governing law, whether it is a consumer or commercial transaction and the type of document. This summary below addresses the enforceability of electronic signatures under federal and state laws, with a particular focus on laws affecting Illinois, Missouri and California.

Electronic Signature In Global And National Commerce (E-SIGN), a federal law applicable to all states, permits the use of electronic records and signatures in most transactions in or affecting interstate or foreign commerce. Under E-SIGN, an electronic signature is defined as an “electronic sound, symbol, or process, attached to or logically associated with a contract or other record and executed or adopted by a person with the intent to sign the record.”

Under E-SIGN, a signature, contract or other record relating to such transaction may not be denied legal effect, validity or enforceability solely because it is in electronic form or because of an electronic signature. Commercial and consumer transactions, however, are treated differently under E-SIGN, with consumer transactions requiring different standards and disclosures for consumer consent. E-SIGN also has certain exemptions from its validity and enforceability provisions, including, among other things, statutes governing wills, family law, certain articles under the Uniform Commercial Code, court orders, and records relating to certain notices, such as a notice of default or acceleration under a rental agreement for a primary residence.

E-SIGN preempts all state laws on electronic signatures and electronic records that are inconsistent with E-SIGN, except if the state’s enacted version of UETA (summarized below) is identical to the original model act version or has only limited variation.

The UETA was promulgated by the Uniform Law Commissioners in 1999. Currently, Illinois, New York and Washington are the only three states that have not adopted UETA, but each has its own separate law that addresses electronic signatures. The UETA applies to transactions between parties that have agreed to conduct such transactions by electronic means, which is determined from the context and surrounding circumstances, including the parties’ conduct. Under the UETA, the definition of electronic signature is substantially the same as that prescribed under E-SIGN.

Like E-SIGN, the UETA provides that signatures, contracts or other records relating to such transactions may not be denied legal effect, validity or enforceability solely because it is in electronic form, and if a law requires a signature or a record to be in writing, an electronic signature satisfies the law. The UETA, similar to E-SIGN, does not apply to a record relating to the creation and execution of wills, codicils or testamentary trusts, and certain provisions of the Uniform Commercial Code.

As with E-sign and the UETA, the ECSA has exceptions. The ECSA does not apply (a) when its application would result in a construction that is clearly inconsistent with manifest intent of the law (b) to the creation or execution of a will or trust, and (c) to any record that serves as a transferable instrument of rights and obligations, unless an electronic version of such record is functionally an equivalent physical instrument that can only be possessed by one person.

Missouri, Illinois and California have not enacted RON laws, however, as of March 26, 2020, the Illinois governor issued an executive order, which allows for remote notarizations during the COVID-19 disaster proclamation. The requirement that a person “appear before” a notary under Illinois law is satisfied if the notary performs a remote notarization via two-way audio-video technology, the notary is physically within Illinois while performing the act, and the transaction follows guidance posted by the Illinois Secretary of State.