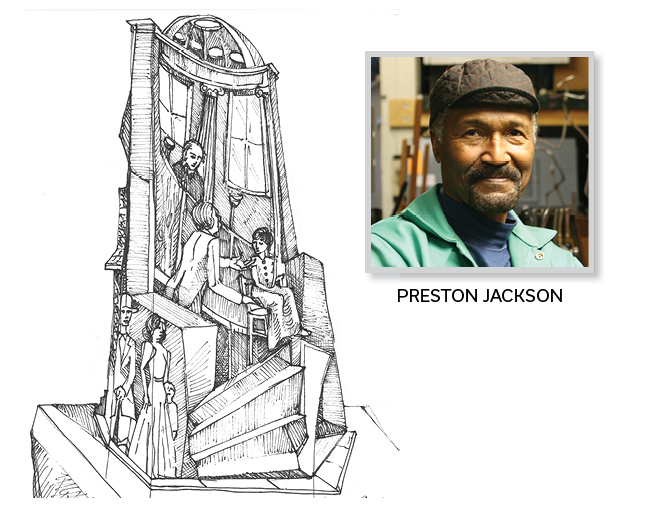 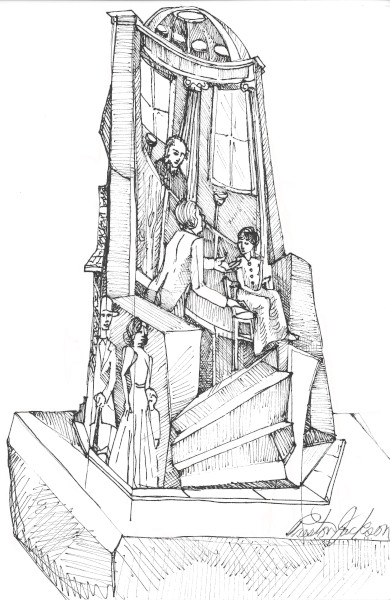 Artist's rendering of the Freedom Suits Memorial by Preston Jackson

Thompson Coburn is proud to announce that the Firm has donated $50,000 toward a major public art project in St. Louis that will honor the hundreds of slaves who filed lawsuits in Missouri courts to demand their freedom.

The Freedom Suits Memorial, scheduled to be completed in July 2021 and located in the east plaza of the Civil Courts Building in downtown St. Louis, will be an eight-foot-by-14-foot cast bronze work by nationally recognized sculptor Preston Jackson, a professor emeritus at the School of the Art Institute of Chicago.

Each angle of the sculpture will depict scenes from the six-decade legal effort by slaves and their attorneys to gain freedom. As detailed in Mr. Jackson’s designs, outside a courthouse, a white family walks freely along a busy street while a white man and a dog escort a runaway slave. Inside the courthouse, an African American woman testifies for her freedom before a judge and lawyer.

The most famous of the approximately 400 plaintiffs who filed Freedom Suits were Dred and Harriet Scott, who were freed by a St. Louis jury only to have the U.S. Supreme Court overturn the verdict in a landmark 1857 decision that denied citizenship to all people of African ancestry, regardless of whether they were enslaved or free. Public outcry over the decision is widely regarded as one of the catalysts for the Civil War.

The Freedom Suits Memorial Steering Committee, whose members include judges and court personnel, lawyers, academics and arts leaders, is in the process of raising $1 million for the artwork and accompanying landscaping of the plaza. The Steering Committee also plans to launch a virtual learning center for the memorial, with a dedicated website and educational app where visitors can learn not only about the courageous plaintiffs, but also about how their efforts served as the spark for African Americans to fight for self-determination and Civil Rights.

“This is a chapter of American history — and Missouri history — that deeply deserves closer examination and illumination,” said Steering Committee Chair Paul Venker. “Our committee thanks Thompson Coburn for the firm’s incredibly generous donation and its commitment to a project that connects the courageous acts of these litigants to the continuing struggle of African Americans to overcome barriers to justice.”

“We’re proud to be among the very first law firms to support this powerful work of art,” said Roman Wuller, Chair of Thompson Coburn. “When finished, Mr. Jackson’s work will tell the story of the strength and perseverance of the African American plaintiffs who took the first steps on the long — and not yet complete — road to equal justice under the law.”

“As a law firm community committed to diversity and inclusion, we believe the Freedom Suits Memorial will help future generations recognize the impact of these legal pioneers and be inspired to call out racial bias and defend the rights and dignity of all underrepresented groups in our country.”