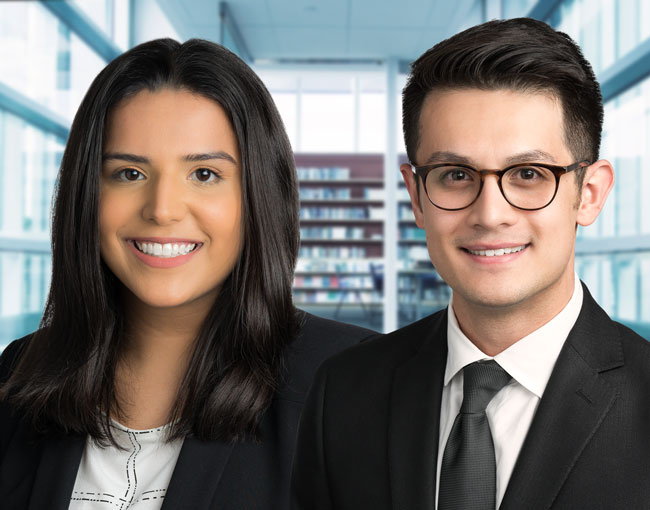 Thompson Coburn is proud to announce that our 2021-2022 Eagleton Scholarship has been awarded to Ash Dodwani and Derek Froman, both first-year law students at Washington University School of Law in St. Louis. It is the first time in the diversity scholarship’s 14-year history that two law students have been selected for the annual honor.

“This was an instance where we had two outstanding candidates, so we happily decided to bring both Ash and Derek into our Eagleton Scholarship family,” said Tony Anderson, co-chair of Thompson Coburn’s Diversity Committee.

Added Judge Booker T. Shaw, also a co-chair of the Diversity Committee, “Each year our scholarship committee looks for diverse law students with great achievements and great potential. This year’s two recipients have both qualities in spades, and we’re delighted that we have the opportunity to support their legal education and early careers.”

“We extend our congratulations to Ash and Derek,” said Roman Wuller, Chair of Thompson Coburn. “Through their exemplary academic performances, community and civic involvement, and strong connection to their diverse racial and socio-economic backgrounds, Ash and Derek embody the values of our late colleague Senator Thomas F. Eagleton, who himself was committed to creating pathways for diverse young people in our profession.”

The Thomas F. Eagleton Scholarship is awarded annually to 1L law students belonging to a demographic group underrepresented in the legal profession. Recipients receive a full year of mentoring provided by a Thompson Coburn partner and a paid internship for the following summer. Prospective Eagleton Scholars must be enrolled at Washington University, Saint Louis University, University of Missouri in Columbia or the University of Illinois at Urbana-Champaign law schools to be eligible for the award.

Ashvanika “Ash” Dodwani earned a B.A. in Political Science and Philosophy from Berea College in Berea, Kentucky. As an undergrad, Ash founded Berea College’s first national moot court team, served as vice chair of the International Model African Union, completed internships in three different areas of law and became a champion in national parliamentary debate. Ash is a native Sindhi speaker who is also proficient in Hindi and Urdu.

“As a child, my diverse identity was ostracized and perceived as a threat,” said Ash. “But I believe that diversity entails the ability to express your culture, personality and reality without fear of exclusion. I’m thankful to the educational and professional institutions like Thompson Coburn that believe in the importance of diversity and take actionable measures to support people from diverse backgrounds. I’m proud to represent the Firm and Wash U in continuing the important legacy of the late Senator Eagleton.”

Derek Froman earned a B.A. in Music with minors in English, Marketing and Music Technologies from Culver-Stockton College in Canton, Missouri. A gifted pianist and composer, Derek served as a founding member of a YMCA program in Canton called “Signature Sounds,” which promotes diversity by introducing young student-composers to the instruments and styles of Latin, Asian, Indian and South American music cultures. Thanks to an international study award from the Hagan Scholarship Foundation, a national merit-based scholarship program that supports rural students, Derek spent part of his junior year in Florence studying art, music and cross-cultural psychology.

Derek grew up in a rural Missouri community where he was one of a few minorities in his town. “In this isolated world, I felt pressured to suppress my mixed-race identity,” he said. “Through education and new experiences, I realized my identity has uniquely equipped me to serve as a voice for others. This cause, I believe, is best served by a career in law, and I’m delighted and honored that Thompson Coburn will be supporting me in the early stages of my legal career.”

Said Elizabeth Walsh, associate dean for student life at Washington University School of Law, “We heartily congratulate Ash and Derek, and extend thanks to Thompson Coburn for the Firm’s exemplary record of supporting diverse law students through remarkable opportunities like the Eagleton Scholarship. Wash U law is proud to be an active partner in Thompson Coburn’s efforts to strengthen the diversity of the legal profession and build a legal community that better represents the rich diversity of our broader society.”