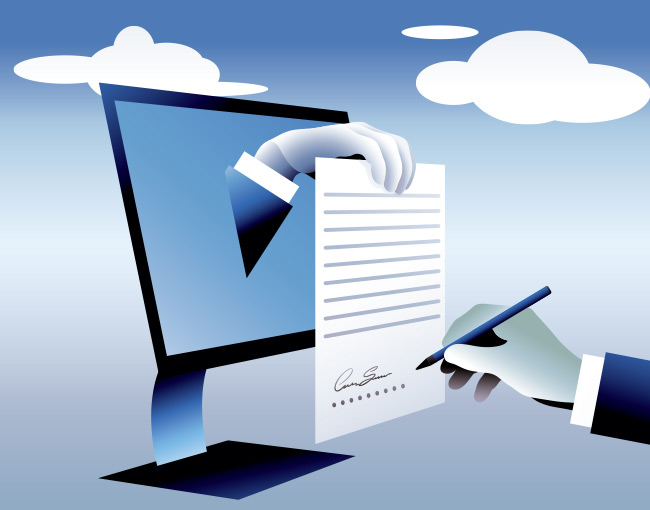 If any area of the law could be shielded from the all-consuming influence of the Internet, it ought to be the age-old law of contracts. Nothing about the Internet changes basic elements of contract law, like requirements of offer, acceptance, and consideration.

But one crucial bit of evidence about making contracts electronically seems to bedevil courts: When and how does a user agree to a contract electronically? This crucial element of contract formation — manifestation of assent — is the Internet twist for contract making.

Lots of contracts occur every day, with few formalities. When you order a hamburger for lunch, you are agreeing to pay the prescribed price, and the restaurant is agreeing to provide you the burger. The transaction is probably over before you realize you’ve been a party to a contract. Most transactions in daily life proceed like this.

Other contracts are attended to with a mixture of solemnity and formality. A real estate closing may be conducted at a special time and place, with all the parties brought together to sign the documents, and notaries to authenticate the signatures. You’ll see similar attention to signatures and authentication in lending agreements, legal settlements, and major corporate transactions.

The difference between the relatively informal everyday contracts and the formal ones that are signed in writing is a critical element of contract law that lay people often overlook or misunderstand. Popular sayings like “get it in writing,” or “oral contract” seem to presume that an agreement is less valid, or less enforceable if it is not in writing.

But in fact most contracts don’t have to be in writing. In the long course of Anglo-American law, contracts moved to writing (a process known as textualization) only relatively recently. Oral contracts aren’t an aberration or mistake; they’re the foundation of our contract law.

Even now, a formal written document signed by the parties is rarely necessary; in fact, much commerce would grind to a halt if a written contract were required. In many situations, a contract may be made in any manner sufficient to show agreement, including conduct by both parties which recognizes the existence of a contract.

Thus, writing and signature are only required in particular situations. State laws (called “statutes of frauds”) determine which contracts must be signed and in writing, and in most states only six categories of contracts need to be memorialized in a writing, signed by the party to be charged:

Law students often remember these categories using the mnemonic "MY LEGS": Marriage, contracts for more than one Year, Land, Executor (or Estate), Goods ($500 or more), Surety.

That’s why signatures are required for real estate contracts, but not hamburger orders (unless, perhaps, you are ravenous and order $500 worth of burgers).  In the vast majority of cases, the key to contract formation is whether there has been a "manifestation of assent” by written or spoken words between the parties or by other action (or even by failure to act).

For those cases where a writing and a signature are required, the next questions are, “What is a writing?” and “What is a signature?” In each case, it may not be what you think.

To satisfy the statute of frauds, you don’t need a formally written contract. Even a scrap of paper could qualify, so long as it contained the essential terms of the deal. The signature can be as simple as a party’s initials, his or her printed name, or even a stamp or reference to the names tied to a description of the deal.

Most states have enacted some form of the Uniform Electronic Transactions Act (UETA). UETA provides for recognition of electronic records and signatures. With only a few exceptions (such as wills and trusts), if a contract requires a writing and written signature, an electronic record and signature will work. For the few states that haven’t enacted UETA, a federal law, Electronic Signatures in Global and National Commerce Act (E-SIGN) provides the same result, though it has more exceptions.

Under either UETA or E-SIGN, all parties must consent to use of electronic records and signatures. That’s a bit of a Catch-22, since parties that deal with one another electronically rarely explicitly agree to electronic dealings — and if they do so electronically, how is that consent enforceable? But in most electronic courses of dealings, the consent of the parties is apparent, and consent is rarely contested.

And perhaps most importantly, a signature doesn’t even need to include your name or initials. The purpose of the signature requirement of the statute of frauds was simply to clearly establish your assent. If that can be done in other ways, a traditional signature is not required. The ubiquitous “click-through” pages on Internet sites is a prime example.

Under UETA and E-SIGN, a signature is defined as “an electronic sound, symbol, or process, attached to or logically associated with a contract or other record and executed or adopted by a person with the intent to sign the record.” Courts have interpreted that language to mean that the click of a button online can replace an actual signature.

And that brings us to the crucial legal twist for online contracting: What kind of electronic dealings demonstrate a “manifestation of assent” to make a contract? For online contracts, courts must determine what electronic activity constitutes proof of an agreement (and, for deals subject to the statute of frauds, whether the “writing” and “signature” requirements have been met).

Courts often examine initially whether the user showed assent through some kind of “click-through.” This can involve electronically checking a graphic of some kind, clicking on “I agree,” or clicking on a direction to enter an order where that click-through button makes it clear that doing so subjects the buyer to the seller’s terms.

In some cases, particularly where the statute of frauds does not require a signature, contracts can be created without a click-through, if, in the circumstances, the user had reasonable notice of the terms to which he or she was subject. In many cases, for example, a website user is found to have reasonable notice of website terms that are can be readily accessed through links on the website.

Unfortunately, as Eric Goldman, a law professor who follows this area closely has noted, some court decisions have cast “a hazy fog of anarchy” over the nomenclature and classifications of online assent.

For example, one important case classified a common situation, where the buyer is clearly warned at the time of ordering that the order will be subject to the seller’s terms, as an arguably inferior “browse-wrap” (equivalent to simply browsing the web site or opening the box containing a software CD) and not a classic and effective “click-through” (requiring some affirmative “click” to indicate assent) — a distinction that is hard to understand.

The importance of assent

Parties doing business electronically probably should disregard these legal labels and focus simply on getting clear evidence of the buyer’s assent. An affirmative click, especially on a button labeled “I agree,” or otherwise unequivocally consenting to the seller’s terms, is usually best. If a check box or order button is used, the language surrounding it should be clear as to its meaning and significance.

Getting clear assent in real time, however, isn’t always enough. You also may need to prove at a later date that consent occurred. Your ordering software should record customer activity, such as the click-through consents. And you should retain records of your past website forms and contract terms, so that you can recreate those that were in place at the time of any contested transaction.

Finally, in some cases even the user’s proven consent to your terms of sale won’t save those terms. In many cases, consumers attack certain contract terms as “unconscionable,” essentially meaning that they were so grossly unfair that courts should not enforce them. These claims are often made with respect to indemnity, warranty-waiver, and arbitration provisions. Though unconscionability isn’t a unique online issue, some courts seem especially concerned about ordinary online consumers getting caught up in such unexpected and severe terms given our natural impatience with wading through dense legalese (how many of us have actually read each word of an iTunes license?).

Ultimately, assent is the big Internet twist for contract-making. If you are doing business on the Internet, take care to obtain clear assent from the parties with whom you are dealing, and preserve good evidence of that assent.