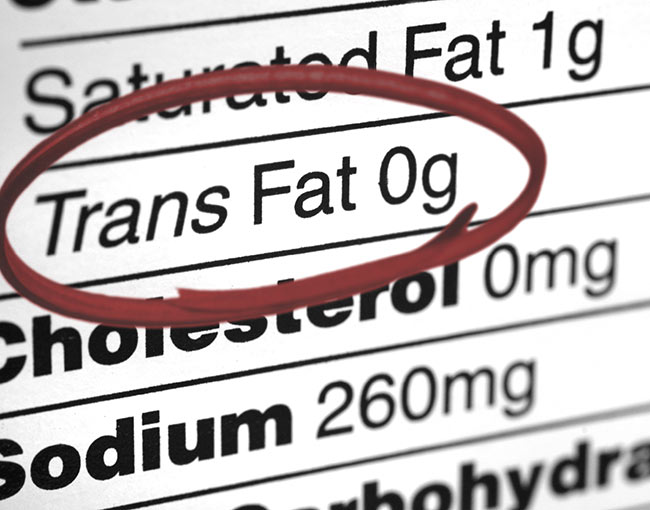 With the continued implementation of the Food Safety and Modernization Act, the FDA has been paying particular attention to the ingredients listed on the Nutrition Facts Panels on food products. As a result, last year the FDA proposed two new Rules concerning the revamping of the nutrition facts panel. The comment period closed for both as of late 2014, however, the FDA’s activity continues as demonstrated by the agency’s recent pronouncement that Trans Fats, or partially hydrogenated oils (PHOs), are not Generally Recognized as Safe, more commonly referred to as GRAS.

Trans fats get the axe

All food ingredients and additives must be deemed safe by the FDA when used in human food or animal feed. This requirement ensures that the ingredients in our food are subject to a minimum level of safety testing before they are made available to American consumers. While there are several methods by which a product can be listed as safe, including a specific GRAS finding, products found not to be GRAS may not generally be used as an ingredient in food unless premarket review and approval is obtained from the FDA.

In 2006, the FDA first indicated concern about Trans Fats when it required that all food manufacturers specifically list the grams of Trans Fats in their foods on the Nutrition Facts panel on every container of product. (See 21 C.F.R. § 101.9(c).) Then, in November 2013, the FDA made a preliminary finding that Trans Fats were not GRAS, seeking comments from the industry and closing said comments in March 2014. This finding was based in part on the FDA finding that Trans Fat raised the LDL cholesterol levels , leading to higher risks of heart attack and other diseases to consumers.

In June 2015, the FDA’s final determination on PHOs found that large portions of food products in the United States contain Trans Fats. The research showed that small amounts can have a cumulative effect, increasing the risk of coronary heart disease by contributing to the buildup of plaque inside the arteries that can lead to a heart attack. The comments made on the 2013-2014 preliminary order were overwhelmingly in favor of approving the preliminary order, and after a review of the current scientific research, the FDA has issued the final determination that Trans Fats are “not GRAS for any use in human food.” Going forward, Trans Fat could only be added to food for a very specific purpose after the filing and granting of a petition.

One major issue arose, however, in crafting the order: compliance dates. The industry made clear that the production of Trans Fats was not a quick process, and finding alternatives would take time. Several comments stated that since PHOs take approximately 18 months from planting PHO-producing plants to final processing before these are food ingredient ready, the industry would need no less than three years to switch farming operations to replace oil crops. This time would be in addition to product reformulation and development. Furthermore, the industry indicated that there may be uses of Trans Fats that were entirely safe, and would need time to create, file and obtain approval on the necessary food additive petitions so that existing stock and already planted stock plants would not be wasted unnecessarily.

Ultimately, the FDA decided that Trans Fats must be removed from American food products within three years of the date the order was issued. Interestingly, unlike similar orders, guidances and Rules from the FDA, that three-year deadline applies independent of the size of companies in the industry. Often, such actions allow small entities (those businesses with fewer employees and lower yearly revenues) additional time for compliance. However, though the FDA recognized the impact the ruling would have on small businesses, it did not create a separate compliance date.

The removal of Tran Fat impacts food manufacturers that have a product which contains PHOs and now these companies must decide if petitioning for approval of use of these ingredients is a regulatory and business strategy worth considering.

In addition to the findings regarding Trans Fats, the FDA is currently in the middle of a series of required changes to the Nutrition Facts Panel found on almost all food products in the U.S. (all products but those regulated by the USDA). These Panel changes are found in two new Rules promulgated last year by the FDA and still under review after months of open comment periods. The two rules are aimed at changing the Nutrition Facts panel to better focus on those substances in foods that are of greatest concerns to American consumers, and de-emphasize those that are no longer of concern since the panel was last amended. These changes include:

In addition to recalculating several RDIs of vitamins and minerals, plus reevaluating the presence of some nutrients on food packaging, the FDA has also revisited the serving size disclosures found on the Nutrition Facts panel. Currently, there are a set of “Reference Amounts Customarily Consumed” that the FDA created in 1994. Since then, not only has our understanding of food nutrition changed, but so too has the food consuming habits of the average American. The FDA is reevaluating these RACCs and requiring food manufacturers to label their products differently to better educate the consumer as to the suggested serving sizes, and how many are contained in a given package. For example, a 20oz bottle of soda is a product size normally consumed by Americans as a single serving, but one bottle is currently labeled as containing two (or more) servings per package. The FDA finds that this is misleading to the average American since the consumer rarely notices that the values are for more than one serving.

Under the new system, the labels would need to bear more than one Nutrition Facts panel, one for the entirety of the bottle as a single serving, and one for a single serving as currently defined. While this is good news for the consumer, manufacturers and distributers are going to encounter significant challenges. Many companies currently contour packaging to contain a label containing sufficient space for the information currently required. If the package must bear an additional Nutrition Facts panel (usually the largest area of a label next to the product name and logo), not only will the label need to be re-engineered, but the packaging as well.

Finally, as part of its nutrition disclosure update, the FDA has entirely redesigned the Nutrition Facts panel found on the packaging of food products. The FDA claims that the purpose of the redesign is to better highlight those nutrient substances that are of highest concern to Americans looking to eat healthy.

Above, the current label is on the left, with the proposed panel on the right. The new panel, once the “footnote” on the bottom is finalized, will take up more space than the previous label, and will, like the new serving size rules, require an evaluation of both the product labeling and packaging.

The Nutrition Facts panel is an integral part of a food product’s label and therefore subject to regulatory scrutiny. These changes and others that are likely coming from the FDA’s Food Center are going to require a great deal of new compliance work on behalf of food companies of all sizes.