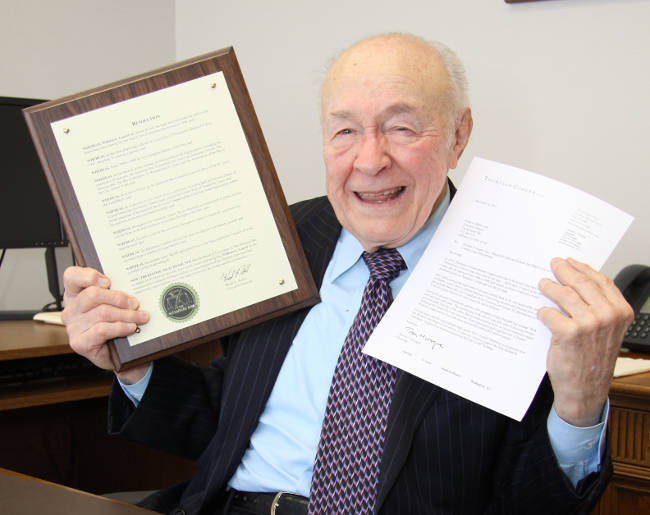 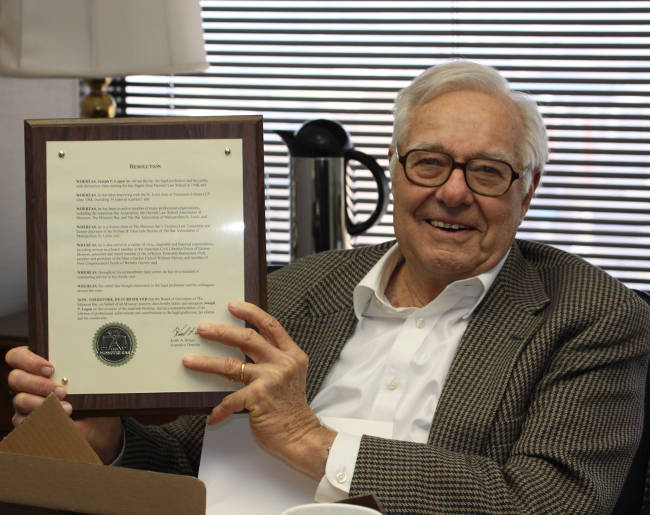 Joe Logan shows his plaque from the Missouri Bar Board of Governors.

The Missouri Bar’s Board of Governors issued a pair of resolutions in December honoring two of Thompson Coburn’s most distinguished attorneys.

Longtime partners Bill Guerri and Joe Logan each received a plaque signed by Missouri Bar Executive Director Keith Birkes that recognized them for their decades of outstanding legal, civic and charitable service.

Logan was acknowledged for his “extraordinary legal career" and for setting "a standard of outstanding service to his clients." Guerri received accolades for displaying a “commitment to public service and pro bono work that continues to resonate throughout the firm.”

Guerri’s tireless dedication to the legal needs of the poor connect back to his own hardscrabble upbringing in Higbee, a tiny town in northern Missouri. From selling chickens and plucking fallen coal from the railroad tracks, Guerri rose to graduate from Columbia Law School. He practiced law in New York for a short time before returning to his native Missouri to join the firm in 1947.

During his decades of exemplary practice — and his 20 years as the firm’s managing partner, from 1968 to 1988 — Guerri preached a simple but affecting message: Work hard and help each other. Outside of the office, he devoted countless hours to crucial community causes, including the United Way, the American Heart Association and Legal Services of Eastern Missouri, each of which has honored him with a public service award.

The son of a prosecuting attorney in Topeka, Kan., Logan graduated from Dartmouth College in 1942. He quickly volunteered with the U.S. Naval Reserve. By the war’s end, he had seen combat in both the European and Pacific theatres, supported the allied landings at Normandy on D-Day and earned a Bronze Star for directing gunnery stations that shot down four enemy aircraft during the battle for Okinawa. Logan traded his Navy whites for suits when he graduated from Harvard Law School and joined Thompson & Mitchell in 1949.

Over the next six decades, he led the firm’s trusts and estates practice, participated in firm management and served on the board of the American Civil Liberties Union. Never one to avoid a challenge, Logan also climbed Mont Blanc in the French Alps and Mount Kilimanjaro. He trained for another climb by daily scaling 34 flights of stairs to his law office.

Thompson Coburn congratulates Bill Guerri and Joe Logan for this well-deserved recognition and thanks them for their distinguished service.