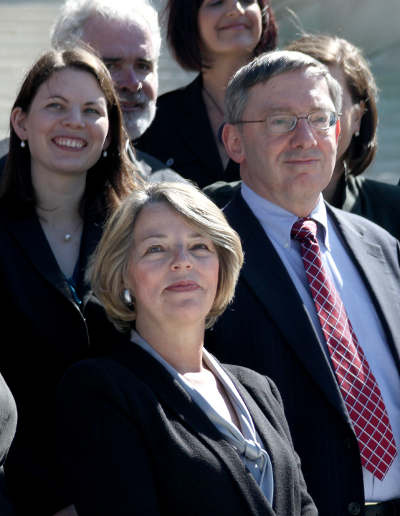 Thompson Coburn Partner Sherri Strand, bottom left, stands on the steps of the U.S. Supreme Court in October 2011, after sitting for oral arguments on the Hosanna-Tabor case. Professor and co-counsel Douglas Laycock, right, argued the case before the high court. Photo courtesy of LCMS Communications.

On January 11, 2012, the U.S. Supreme Court unanimously ruled in favor of TC client Hosanna-Tabor in Hosanna-Tabor Evangelical Lutheran Church and School v. Equal Employment Opportunity Commission, et al. For the first time, the U.S. Supreme Court acknowledged the “ministerial exception," a doctrine grounded in the First Amendment and developed by the U.S. Courts of Appeal as a bar to claims by ministers and other religious leaders under employment-discrimination laws.

Chief Justice John G. Roberts wrote in the opinion and the court held that both the Establishment Clause and the Free Exercise Clause of the First Amendment prohibit the government from interfering with a church’s determination of who will serve as its minister.

Partner Sherri Strand first became involved in the case after the adverse ruling by the 6th U.S. Circuit Court of Appeals, which held that the ministerial exception did not apply to the claim of a commissioned minister against her former employer, Hosanna-Tabor, because she spent more time teaching secular subjects than religion.

Thompson Coburn filed a Motion for a Rehearing in the Sixth Circuit. Later, the firm , along with co-counsel Douglas Laycock, a professor at the University of Virginia and a leading scholar in religious liberty, and the Beckett Fund, a public interest nonprofit firm in D.C., filed the Petition for Certiorari in the U.S. Supreme Court. Strand and Erwin assisted with all briefs filed on behalf of Hosanna-Tabor and Strand appeared before the Supreme Court during oral argument with Professor Laycock on October 5, 2011.

Various media outlets have written about the case, which has been described as the most important religious freedom case to be decided by the U.S. Supreme Court in decades, and one which benefits all religious organizations in America.