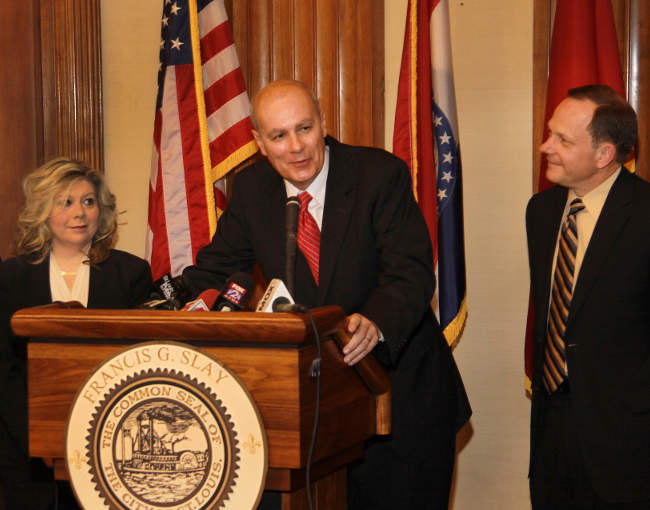 As part of a new pro bono initiative sponsored by the Bar Association of Metropolitan St. Louis, attorneys at Thompson Coburn and other law firms in St. Louis will collaborate with the City Counselor’s Office on a pro bono basis to bring lawsuits against problem properties that threaten the safety and stability of St. Louis neighborhoods.

Attorneys will also review ordinances that address such issues and make recommendations for amending ordinances or adopting new ordinances. St. Louis Mayor Francis Slay announced the partnership, called the Lawyers for the City Initiative, at a Nov. 16 press conference at City Hall.

The initiative came together as a result of the pro bono efforts of Thompson Coburn partner Paul Brown, who led a collaborative project between the Partnership for Downtown St. Louis, the City Counselor’s Office, and a group of downtown property owners and residents. The program is aimed at remedying vacant and derelict properties, which can attract criminal activity and adversely affect neighboring properties.  Paul will serve as chairman of a new BAMSL committee that will organize and oversee the program.

“Not only does this initiative help City neighborhoods, it will provide great opportunities for lawyers in private law firms to get into court early in their careers,” said Thompson Coburn Chairman Tom Minogue. “It’s a higher calling to be a lawyer, and that’s part of our calling."