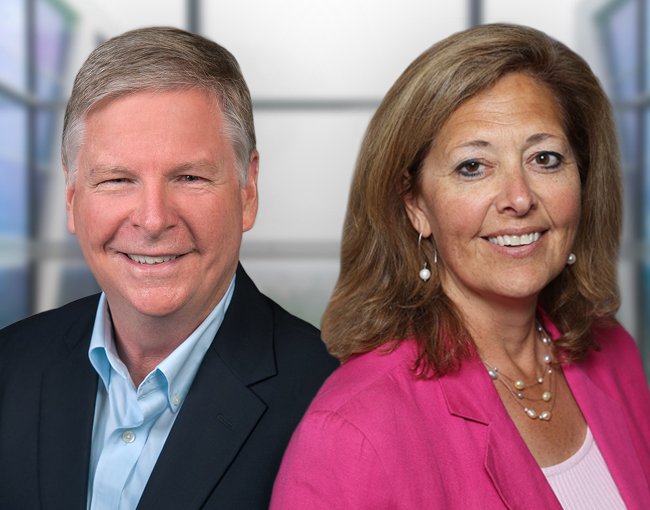 Barry Klinckhardt, general counsel of Fabick Cat, and Susan Myers, general counsel of the Metropolitan St. Louis Sewer District, are among the seven honorees of the 2018 Corporate Counsel Awards. The awards, sponsored by the St. Louis Business Journal and the St. Louis Chapter of the Association of Corporate Counsel, recognize outstanding leadership by individuals in the legal departments of the region’s top public and private companies.

Barry is the first-ever general counsel at Fabick Cat, the exclusive dealer of Caterpillar equipment, power systems, parts and service, and rental equipment for major portions of the Midwest. The company, which reported revenue of $567 million in 2016, employs more than 1,100 employees in 37 locations across four states.

“It’s really a high point in my career to be a part of the Fabick family,” said Barry. “It’s a company that has been around for over 100 years. You can really sense the pride that current and former employees take in being part of the company.”

Barry is a past president of the St. Louis Chapter of the ACC and an 18-year member of the organization, which he says provides an important bridge between smaller in-house legal teams and the broader St. Louis legal community.

Barry assumed his presidency of the St. Louis Chapter in the wake of the unrest in Ferguson, Missouri. He and other chapter leaders responded by engaging with and deepening the diversity of the organization through chapter events and training. They also created the Bridges Group, a racially balanced group of attorneys who meet regularly to socialize and hold in-depth discussions about race.

“We tried on a number of different levels to bring diversity and inclusion to the forefront in response to the issues raised by Ferguson, and hopefully helped our members cope a little bit better with what was going on,” said Barry.

Susan’s service with the Metropolitan St. Louis Sewer District stretches back 17 years; she became general counsel in 2001. Drawing on her background as an engineer — one of her first jobs was leading a work crew during the cleanup of a Department of Energy Superfund site — Susan has used her technical knowledge and practical legal approach to help MSD navigate regulatory pitfalls, respond to a diverse customer base, and achieve significant public policy wins.

MSD serves more than 1 million customers. Its service area encompasses more than 500 square miles — all of the City of St. Louis and nearly 90% of St. Louis County. Susan says one of her favorite aspects of leading MSD’s legal team is the diversity of legal and business issues that crop up for such a massive public utility.

“Property issues to employment issues to contracts — we cover the whole gamut,” she said. “Another aspect that I really love is that I get to positively influence the services we provide to our customers.”

One of MSD’s major recent accomplishments was the successful passage in 2016 of two major ballot initiatives. The first, Proposition Y, authorized $900 million in sewer bonds to support the continued implementation of a federal consent decree. Proposition S revamped funding for the regional stormwater system by creating a uniform property tax rate across the entire service territory.

“We really felt it was the right thing for the district to be doing for our customers,” said Susan of the measures. Her legal team worked on the legal and policy work supporting the ballot initiatives and celebrated the win on election night.

One of Susan’s major achievements for the regional sewer and wastewater industry was her instrumental role in the formation of the Association of Missouri Cleanwater Agencies (AMCA), a statewide advocacy group of local governments, water/sewer/stormwater utilities, and environmental engineering firms. The group, which now represents approximately 70 percent of the population in Missouri that has sewer systems, is actively involved with state policymakers on every major water quality issue related to the management of municipal water, sewer, and stormwater utilities.

Thompson Coburn congratulates Barry, Susan, and all the 2018 honorees of the Corporate Counsel Awards.