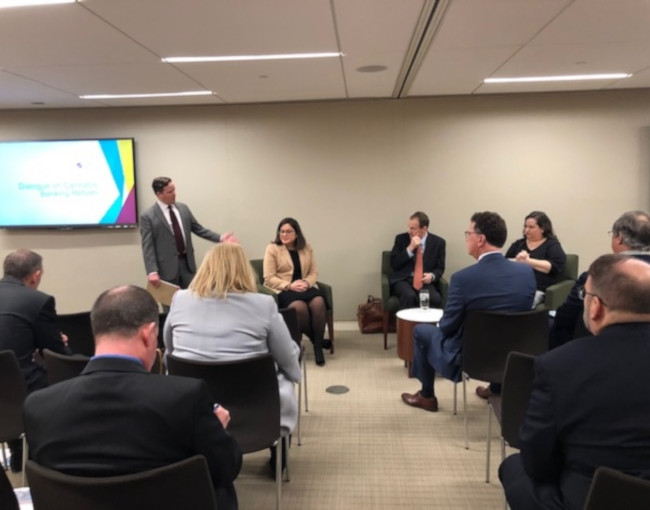 On Tuesday, February 5, members of the financial services industry gathered at Thompson Coburn for a discussion on cannabis banking reform. The panel was led by the Counsel to Senator Cory Gardner (R-CO), Brian Wanamaker, along with Julie Siegel, Banking Counsel to Senator Elizabeth Warren (D-MA), Becky Dansky, Executive Director of the Safe and Responsible Banking Alliance, and Jack Jacobson, Advisor at Thompson Coburn.

The dialogue centered around the STATES Act, which is expected to be reintroduced by Gardner and Warren early in the 116th  Congress. The STATES Act would amend the Controlled Substances Act and federal anti-money laundering law, so that actions in compliance with state, territory, or tribal cannabis laws would no longer be unlawful under federal law. In other words, it says that the states should be trusted to make their own laws and regulations with respect to cannabis.

Fixing the disconnect between federal and state law is fundamental to resolving any other regulatory challenges there may be. The passage of the STATES Act would ensure that funds involved in  cannabis transactions conducted in accordance with applicable state law would no longer be considered illegally gained. Thus, banks and financial institutions may be more willing to engage the industry. The STATES Act would eliminate a significant part of the risk that financial institutions currently experience regarding the licensed cannabis industry.

Though a national consensus on cannabis laws may be difficult to reach, there is almost universal agreement that the current situation is untenable. All speakers were encouraged by the sense of bipartisanship surrounding the issue. Gardner and Warren’s offices are striving for an equal number of cosponsors on both sides of the aisle to help ensure the legislation remains non-partisan.

In related news, the House Financial Services Subcommittee on Consumer Protections and Financial Institutions held a hearing, “Challenges and Solutions: Access to Banking Services for Cannabis-Related Businesses”, at 2:00 pm on February 13.