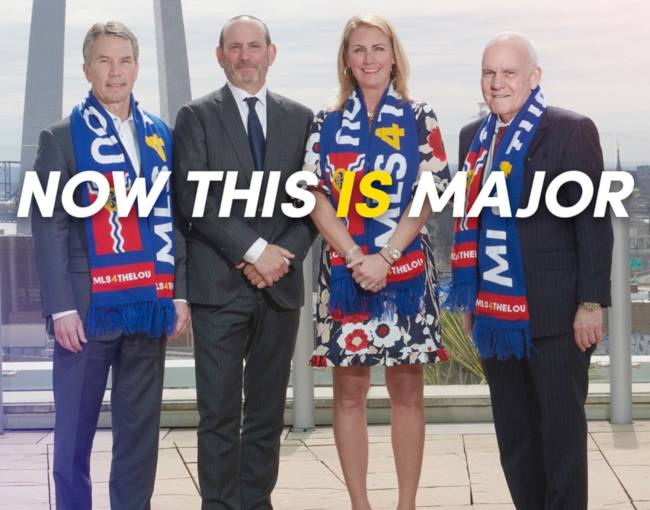 Today, Don Garber, the Commissioner of Major League Soccer, officially announced that St. Louis has been awarded an MLS team.

“It is with great pride that we welcome St. Louis to Major League Soccer,” said Commissioner Garber. “St. Louis is a city with a rich soccer tradition, and it is a market we have considered since the league’s inception. Our league becomes stronger today with the addition of the city’s deeply dedicated soccer fans, and the committed and innovative local ownership group led by Carolyn Kindle Betz, the Taylor family, and Jim Kavanaugh.”

Soccer in America has historical roots in St. Louis. Five St. Louisans were on the 1950 World Cup team that beat England. At least one St. Louisan has served on every U.S. World Cup team since that victory. And Saint Louis University has won more NCAA soccer titles than any other university. Major League Soccer has long wanted to have a team in St. Louis.

Today’s announcement caps a year-long effort by the ownership group to bring a team to St. Louis. The ownership group is the first MLS team (and one of the few teams of any sport in the world) to be majority owned and led by women, including Carolyn Kindle Betz, the president of Enterprise Holdings Foundation and the granddaughter of Enterprise Rent-A-Car founder Jack Taylor.

“Our ownership group has come a long way since we first announced our bid last October at Mathews-Dickey Boys and Girls Club, and it’s an incredible feeling to now be able to say, St. Louis is home to the first official majority female-led ownership group in MLS,” said Carolyn Kindle Betz. “Our MLS team and stadium will only add to St. Louis’ renaissance currently underway and will provide us with a great opportunity to bring together many different segments of the community, uniting people in their love for the game.”