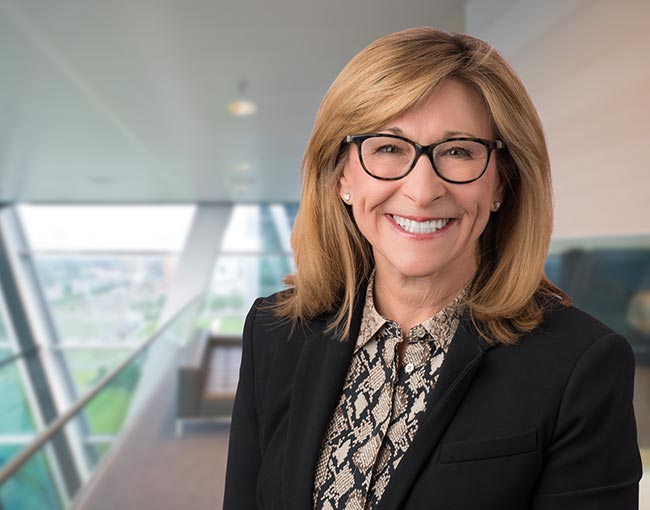 Thompson Coburn public finance partner Debbie Rush has been named a Women’s Justice Award winner by Missouri Lawyers Media. Debbie, who will be honored in the Corporate category, will be recognized for her achievements along with other WJA nominees at a June 26 event in St. Louis and will be profiled in a special section of Missouri Lawyers Weekly.

With 26 years of experience in public finance, tax and development incentives, Debbie has served as underwriter, bond, bank and developer counsel on hundreds of tax-exempt and taxable financings involving multi-million dollar municipal, public-private, retail and commercial projects. As underwriter’s counsel for longtime client Stifel, Debbie has worked on major transactions across the Midwest, including the National Geospatial-Intelligence Agency’s new facility in North St. Louis and the $367 million Loews Kanas City Convention Center Hotel.

Debbie served for eight years on Thompson Coburn’s Management Committee and currently chairs the Firm’s Marketing Committee, which consults on all marketing and business development efforts across the Firm’s six offices.

Debbie was one of a core group of women partners who founded Thompson Coburn’s Total Commitment Women’s Initiative and helped the group define its initial goals: Providing training and education to women lawyers, building connections across the Firm and raising the visibility of women lawyers. Debbie has remained active in the group as it has matured and shifted its focus to leadership training and business development coaching.

Debbie has lent her significant legal and business experience to a number of community organizations, including the Mary Institute and St. Louis Country Day School, the Forsyth School and FOCUS St. Louis. Debbie has served for more than a decade on the board of the Downtown Community Improvement District and is a past chair of the Board of Trustees for Downtown STL, Inc. Both organizations are dedicated to strengthening the economic development of downtown St. Louis and in recent years worked on major initiatives for the region, including the redevelopment of Union Station into an aquarium and entertainment district and St. Louis’ successful bid for the 2020 NHL All-Star Game.