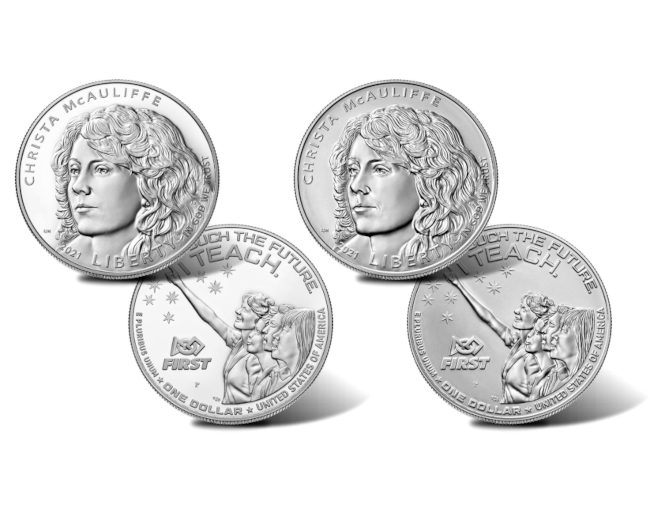 Today, on the 35th anniversary of the Challenger shuttle disaster, the U.S. Mint has made available for pre-order the Christa McAuliffe Commemorative Coin. Proceeds from a surcharge on the sale of each silver dollar coin will go to Thompson Coburn client FIRST, one of the nation’s leading STEM engagement programs for K-12 students.

“Struck” in both proof and uncirculated collector-grade finishes, the coin on one side features a profile of McAuliffe, the New Hampshire social studies instructor selected by NASA to be the first teacher to travel to space. The reverse side of the coin depicts McAuliffe teaching three students; she points skyward at seven stars representing the seven astronauts lost in the 1986 shuttle explosion. The coin’s inscription reads: “I touch the future. I teach.” The FIRST logo also appears on the coin, the first time a nonprofit logo has been featured on a commemorative coin.

The creation and sale of the commemorative coin were authorized by a law signed by President Trump in October 2019. The successful passage of the measure was a massive win for FIRST, which will use the funds to promote its mission of inspiring the next generation of students to pursue science, technology, engineering, and mathematics studies.

To reduce the number of coins minted, commemorative coin bills are required to have two-thirds of the members of both the House and the Senate sponsor the bill, a nearly herculean effort in a deeply divided Congress. Previous attempts have failed in the last two Congresses, but a concerted effort by Legislative Director Ben Grove and our Lobbying & Policy team led to building a strong coalition of support on Capitol Hill that got the bill over the finish line.

“It’s a very special day for FIRST and our lobbying team,” Ben said. “Very rarely do our efforts reach such a tangible and satisfying conclusion. I am so proud of the coalition that we built, and the countless FIRST students and teams that engaged in Washington to see this bill get passed. Today, everyone is able to purchase this coin and help us keep reaching for the future that Christa wanted us to touch.”

Thompson Coburn’s Lobbying & Policy group has lobbied on behalf of FIRST since 2013 and was honored in 2015 by the organization for its work in Washington.