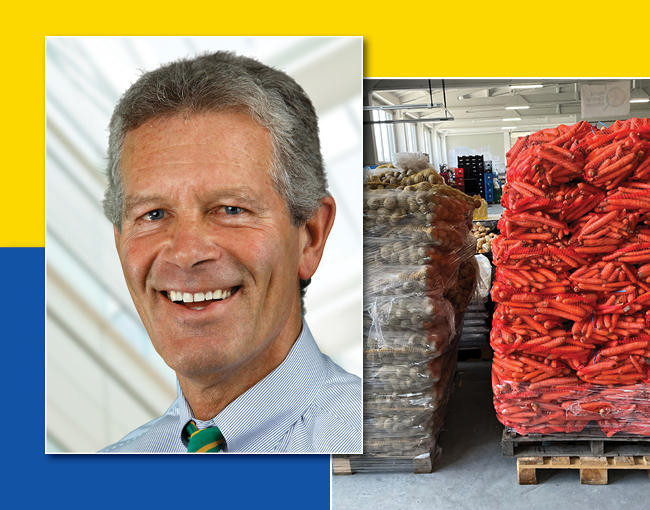 Thompson Coburn and our D.C. office raised more than $12,000 for the World Central Kitchen to honor a recent three-week trip that D.C. Senior Counsel Kent Woodman made to Poland to volunteer with the global nonprofit, which has received worldwide attention for delivering millions of meals to people affected by the conflict in Ukraine.

Kent spent 16 days working 9-hour shifts in the World Central Kitchen’s facilities in Przemysl, Poland, on the Ukrainian border. Standing shoulder-to-shoulder with volunteers from across the U.S. and Europe, Kent helped prepare and box about 5,000 sandwiches a day on long metal prep tables while nearby, volunteer chefs stirred massive vats of soups and stews with oar-size metal paddles.

On other days, Kent and other volunteers peeled pounds of carrots and potatoes destined for the fresh, flavorful dishes that meet WCK founder Chef José Andrés’ mission of providing “a plate of hope” to displaced, hungry people around the world facing violence, war, or natural disasters.

Kent was moved to fly to Poland to volunteer with WCK after watching weeks of news coverage of Russia’s violent attacks on Ukrainian cities and towns. “I just couldn’t watch anymore,” he said. “There wasn’t much internal debate. I can’t speak Ukrainian or provide medical care, but if I could play a very minor role to help people, I thought, ‘I just need to go.’”

Kent used WCK’s easy online volunteer portal to find a volunteer position in Przemysl. On March 28, Kent flew into Warsaw, rented a car, and drove the four hours to his hotel in Rzeszów, Poland, a charming medieval city along the Wisłok River. But Kent had no time to sightsee around the green lowlands of Poland’s Sandomierz Basin. Each morning he would grab breakfast at his hotel, then hit the freeway by 6:30 a.m. for the one-hour drive to Przemysl.

In the large warehouse housing WCK’s facilities, Kent’s fellow volunteers included an Episcopalian priest from New York, a Sonoma winery owner, a Congressman’s father, a former undercover cop from Denver, a Chicago businessman whose relatives perished at Auschwitz, volunteers from the U.K. and France, and several young chefs from across the U.S. He marveled at WCK’s tightly run logistics, which ferried food supplies to the warehouse overnight, maintained strict standards for the assembly and presentation of food, and distributed meals to thousands of refugees.

“The only time we stopped working was for lunch, and because of all the chefs, the lunches were incredibly delicious,” said Kent.

In addition to meal prep and assembly, on some evenings Kent accompanied delivery drivers as they transported meals to different points on the Poland-Ukraine border. Their trucks joined other aid organizations providing medical supplies, clothes, diapers and transportation to Ukrainian refugees. Kent saw firsthand the line of refugees on foot awaiting crossing into Medyka, Poland, a line that often stretched for 10 or 15 miles. The majority of refugees are women, children and the elderly.

“Most people had one or two suitcases, and the kids had backpacks and maybe a stuffed animal,” said Kent. “That’s all they’ve got. They’ve reluctantly left their homes, and left their husbands and fathers behind to fight. Occasionally folks had people in Poland to pick them up, but most did not have a plan or know where they would go.”

“They have huge questions that you can’t really answer,” he said. “The most I can offer is a smile and some food.”

Kent urged others to donate to WCK or the other charities supporting Ukrainians during the conflict. “People need to pay attention, because it’s a true battle between good and evil,” he said. “It’s not just a local dispute that doesn’t affect us. The Ukrainian people are incredibly brave. They just want to be free and live their lives. ‘Slava Ukrayini’ — Glory to Ukraine.”