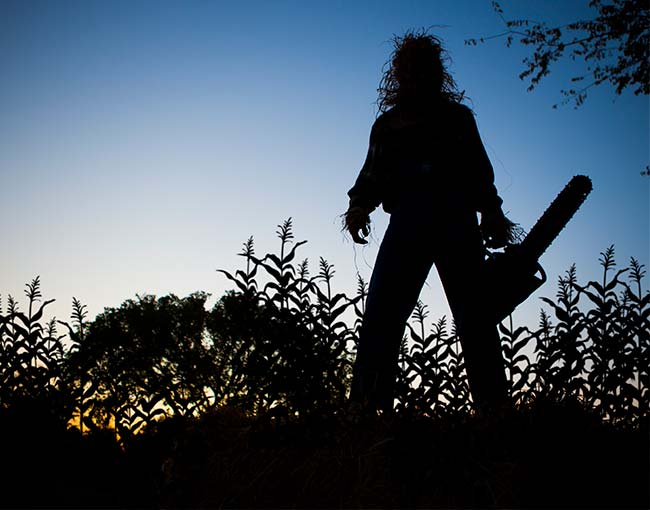 Man assumed the risk of injury from chainsaw-wielding psychopathic killer

Perfectly timed for Halloween 2015, the California Court of Appeal held that a haunted house patron who was injured while running away from an actor carrying a gas powered chainsaw (without the chain) assumed the risk and could not pursue his claim for damages.

In Griffin v. The Haunted Hotel, Inc., the plaintiff purchased a ticket for The Haunted Trail. The attraction featured actors in scary costumes who “frighten, startle and sometimes chase patrons amid loud noises and flashing strobe lights in a one mile loop in Balboa Park.” As only a Court of Appeal could describe, “[a]long the way, actors jump out of dark spaces or spring from around corners, often inches away from patrons, holding bloody prop knives, axes or other weapons, or a severed body part.” If a patron became frightened and ran away, one of the actors would often give chase against the patron. The Haunted Trail played an orientation audiotape for each group of patrons of which the Plaintiff was one:

“Our creatures will not grab you, however, they may accidentally bump into you. Oh, you will be scared sh—less [this is the Court’s censoring] and try to run away, but in the end our creatures will chase you down like the chickens that you are!”

At the same time, The Haunted Trail cautioned patrons that they will not be grabbed or pushed and that running is the main cause of minor injuries. “Make sure to follow the rules and DON’T run and you should be fine!”

In October 2011, the plaintiff and his friends bought tickets for The Haunted Trail. As he walked down the trail, plaintiff admitted he was “scared pretty darn good,” but that “it was fun.” After the final scene, plaintiff headed for the “gate,” which he believed was the exit. Suddenly, an actor started a chainsaw and ran at him. Plaintiff tried to back away, but the actor kept following him, even after the plaintiff told him to stop. When the chainsaw-wielding actor started running after the plaintiff, the plaintiff began running, fell, and injured his wrist. Appropriately, this last portion of the show was called the “Carrie effect,” “so named because, like the horror film “Carrie,” patrons are led to believe the attraction is over, only to be met by one more extreme fright.”

Plaintiff sued for negligence. The Haunted Hotel defended, claiming that plaintiff assumed the risk of his injuries. Under the primary assumption of risk doctrine, there is no duty to eliminate or protect a plaintiff against risks that are inherent in a sport or recreational activity. Under this doctrine, a court need not ask what risks a particular plaintiff subjectively knew of and chose to encounter, but must evaluate the fundamental nature of the recreational activity and the defendant’s role to determine whether the defendant owes a duty to protect a plaintiff from the particular risk of harm. Here, the Court of Appeal agreed that the primary assumption of risk doctrine applies to The Haunted Trail.

“Similarly, here, the point of The Haunted Trail is to scare people, and the risk that someone will become scared and react by running away cannot be eliminated without changing the basic character of the activity. As the trial court aptly noted, ‘[W]ho would want to go to a haunted house that is not scary?’”

Indeed, the Court held that the risk inherent in the “Carrie” ending is exactly the risk that the plaintiff experienced.

Finally, the Court held that while the assumption of risk doctrine does not grant “unbridled legal immunity to all defendants,” it held that there was no exception in this case. A defendant must demonstrate that it has not increased the risks to a participant over and above those inherent in this activity. Because an inherent risk of a fright-event such as The Haunted Trail is that customers will be scared and then run, the “Carrie effect” did not cause any increased risk. Nor did the defendant act recklessly, which is another exception to the application of the doctrine. Reckless conduct is the deliberate disregard of the high degree of probability that an injury will occur. Viewing the evidence most favorably to the plaintiff, in the 14 years The Haunted Trail has been operating before the accident, at least 250,000 patrons attended, and only 10 fell on the road during the “Carrie effect.” Of those, none were injured, except for this particular plaintiff. The Court held there was no high probability that an injury would occur.

In conclusion, the Court put forth the classic and simple truth about this case: “Being chased within the physical confines of The Haunted Trail by a chainsaw carrying maniac is a fundamental part and inherent risk of this amusement. [Plaintiff] voluntarily paid money to experience it. It is not the function of tort law to police such conduct.”