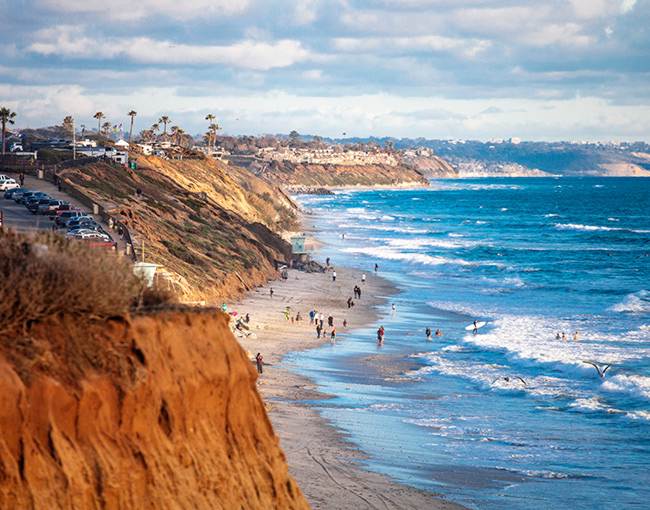 The California Supreme Court recently held that you can’t have your cake and eat it, too. Two adjacent homeowners, with oceanfront properties in Encinitas, California, live on a coastal bluff that “cascades steeply down to the beach and Pacific Ocean.” The Encinitas coastline is especially susceptible to landslides. Since 1986, the properties have been protected by a shared seawall at the base of the bluff and a midbluff erosion control structure. A shared stairway provided the only access from the blufftop to the beach below. The seawall contained 20-foot wooden poles embedded in the beach and cabled to the bluff.

Unusually heavy winter storms caused the bluff below to collapse, destroying part of the seawall, most of the midbluff control structure, and the lower portion of the stairway. The homeowners sought a permit from the California Coastal Commission to demolish the old structure, build a new seawall and rebuild the lower portion of the stairway. (Technically, they sought an amendment to the coastal development permit the Commission issued for the original seawall.) The Commission approved the permit subject to several conditions, three of which were at issue in the case:

The homeowners filed a petition for writ of administrative mandate challenging the 20-year expiration conditions and the condition prohibiting the reconstruction of the lower stairway.

While the administrative mandate proceedings were ongoing, the homeowners satisfied all other permit conditions, obtained the permit, and built the seawall. About a year into the legal proceedings, the Commission sought to obtain judgment in its favor, claiming that the homeowners waived their objections by accepting the permit conditions and building the project. The issue went all the way to the California Supreme Court, the state’s highest court. In Lynch v. California Coastal Commission, the Supreme Court spent time differentiating between the legal concepts of “waiver” (the intentional relinquishment or abandonment of a known right); “estoppel” (which generally requires that a party’s words or acts induced detrimental reliance by the opposing party), and “forfeiture” (a party fails to preserve a claim by raising a timely objection). Here, the Court held that the more accurate term to describe the effect of the homeowners’ actions is “equitable forfeiture.”

The Court held that in a land use context, a landowner may not challenge a permit condition if he or she has acquiesced to it by specific agreement or failure to challenge the condition while accepting the benefits afforded by the permit. “Generally, challenges to allegedly unlawful conditions must be litigated in administrative mandate proceedings.” The Court concluded that the homeowners forfeited their right to challenge the permit’s conditions “by complying with all pre-issuance requirements, accepting the permit, and building the seawall.” The “crucial point,” according to the Court, is that the homeowners went forward with construction before obtaining a judicial determination on their objections. “By accepting the benefits of the permit and building the seawall, [the homeowners] effectively forfeited the right to maintain their otherwise timely objections.”

In response to the claim that the homeowners needed to move forward because of issues of safety, the Court held that when safety is an issue, the property owners could address imminent dangers by obtaining an emergency permit. Such a permit would generally authorize temporary improvements needed for immediate relief when loss or damage is threatened. That would have preserved the status quo while the administrative mandate actions were proceeding. The homeowners did not do so.

In conclusion, the Court provided the moral of the story: “Landowners who proceed with a project before the merits of their claims have been decided risk a finding that their objections were forfeited.”