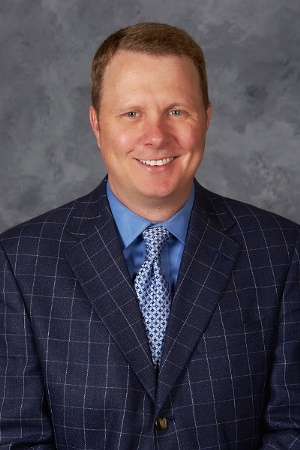 This week on After the Buzzer, Bob Wallace has a “Gloria”-ous guest: Eric Stisser, Vice President of Corporate Sponsorship of the St. Louis Blues. As St. Louis winds down after winning its first-ever Stanley Cup, we thought it was only right to sit down with Eric to discuss the historic season.

Eric gave us a great behind-the-scenes look at the remarkable end-of-season momentum that powered the Blues to the finals. He talks about Coach Craig Berube, rookie goalie sensation Jordan Binnington, and how a league championship affects future sales and marketing strategies. We also discuss the prospect of other pro teams arriving in St. Louis, including the campaign for a Major League Soccer team and the possibility of an XFL franchise.

As the former Director of Corporate sales and Marketing for the St. Louis Rams, Eric was on board for a similar championship season when that team won the Super Bowl in 2000. For the Blues, Eric is responsible for managing and developing corporate partnerships. He also leads the development of special events and directs overall marketing and branding efforts for the Blues and Enterprise Center.

Some highlights of Bob Wallace’s conversation with Eric:

On the Blues’ team spirit:

“They started playing together as a team and, as they like to say, they just played shift by shift. The team looked at the big picture knowing that it would be a marathon and not a sprint.”

On the endurance needed for a playoff run:

“When I think back to our Rams run, that was three games over three weeks, and we were Super Bowl champs. This was 26 games over eight weeks. So you can imagine the endurance.  I didn’t play on the ice obviously but just the endurance of ticket sales, entertaining clients, traveling to away games with clients. Managing your emotions after a very key win, a very tough loss. It was really just the longevity. They say the Stanley Cup is the toughest trophy to win in all sports.”

“When I go to conferences, I’m always asked how two sports teams in the same market have managed to work together. The answer is that we complement each other. We’ve always had a good rapport, but we joined forces when the Rams left St. Louis; we have a Cardinals night and they have a Blues night, we hand out each other's pocket schedules. Sure, there’s some overlap of our seasons in the spring and the fall, but for the most part, we’re different seasons. We’ve come toe-to-toe with certain sponsors who may choose us or them, but, at the end of the day, it is, what it is.”

“I think hockey players are a different breed. Hockey is such a demanding sport. When players start, they’re five or six years old, skating at six in the morning, traveling often. When it comes to giving back and promoting the sport, there’s something special in their DNA. They really enjoy being around the fans, the sponsors, and the community in general.”

After the Buzzer: Episode Guide