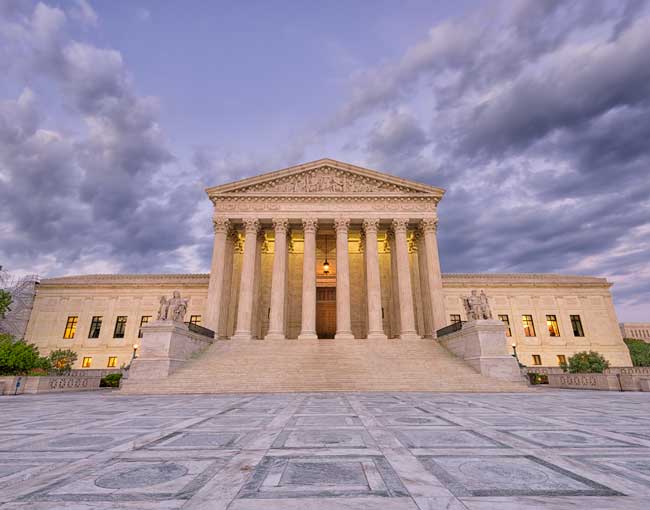 The case addresses the interplay of CERCLA and state law claims. Practitioners have generally accepted the construct of CERCLA being used to address remediation issues at a site while state law can be used to address property loss claims (such as diminution in property value caused by contamination). In Atlantic Richfield, the property owners raised the age-old environmental issue of “how clean is clean.” They sought restoration of their properties under state law – in addition to the remediation already ordered by the U.S. Environmental Protection Agency (“EPA”) under the federal CERCLA program.

The Atlantic Richfield majority held that homeowners located on a Superfund site are technically potentially responsible parties (“PRPs”), even if they did not cause the pollution on their properties. The Court then held that because the homeowners are PRPs, they must comply with CERCLA; this in turn requires them to obtain EPA’s approval before seeking restoration costs that are over and above the remediation the EPA already required. This case raises thorny questions about how CERCLA and state law claims should interface. As explained below, negotiating certain additional language into CERCLA consent decrees may help reduce the risk of unwanted surprises on the complex path through the Superfund maze.

Summary of the case and CERCLA issues

Atlantic Richfield involved the Anaconda Smelter Superfund Site (“the Site”), a 300-square-mile area in Butte, Montana that became heavily contaminated with arsenic, lead and other constituents over the nearly century-long operation of a copper smelter. The defendant, Atlantic Richfield Company (“Atlantic Richfield”), is the current owner of much of the Site and successor in interest to the company that operated the smelter. In 1983, the EPA listed the Site on the Superfund National Priorities List. The EPA has since worked with Atlantic Richfield and other interested parties to develop and implement remedial plans, which are expected to be completed by about 2025 (although ongoing monitoring activities will take place indefinitely into the future). Throughout the history of the Site, EPA and Atlantic Richfield entered into multiple administrative orders, which set forth Atlantic Richfield’s remediation requirements at the massive Site.

The plaintiffs are a group of nearly 100 landowners who brought state law claims of nuisance and trespass in Montana state court. The state court plaintiffs sought compensatory damages, which focus on diminution in property value and loss of use, among other alleged losses. Those claims are certainly not out of the ordinary. However, and importantly, these plaintiffs also sought restoration damages, despite the pending CERCLA action. Plaintiffs’ restoration damages under Montana law would be used to fund specific remediation activities on plaintiffs’ properties. If plaintiffs’ prevailed, that remediation obligation would be in addition to the cleanup activity already required of Atlantic Richfield by EPA under the Superfund program. Basically, the plaintiffs sought to have their properties remediated by Atlantic Richfield to a cleaner level than the EPA had already ordered under the CERCLA process.

In the Montana trial court, Atlantic Richfield argued that CERCLA preempted the recovery of those damages based on the inconsistency between the restoration work sought by the plaintiffs and the EPA orders under which Atlantic Richfield was bound. Atlantic Richfield further argued that the state court lacked jurisdiction to review the plaintiffs’ claims for restoration damages in the first place because those claims were “challenges to removal or remedial action” under CERCLA Section 113(h) (which explicitly divests federal courts of jurisdiction over such challenges) and because the claims “arise under” CERCLA within the meaning of Section 113(b) (stating “the United States district courts shall have exclusive original jurisdiction over all controversies arising under this chapter”).

According to Atlantic Richfield, Section 113(b) and (h) operate in tandem to grant jurisdiction only to federal courts for claims “arising under” CERCLA, while stripping both federal and state courts of jurisdiction over most “challenges to removal or remedial action[s],” including the plaintiffs’ restoration claim. Lastly, Atlantic Richfield contended that even if the state court retained jurisdiction, the plaintiffs were PRPs and the restoration remedy they sought constituted a “remedial action” for which EPA approval was required under Section 122(e)(6) (“When… a potentially responsible party pursuant to an administrative order or consent decree ... has initiated a remedial investigation and feasibility study for a [site], no potentially responsible party may undertake any remedial action at the facility unless such remedial action has been authorized by [EPA]”).

The Montana trial court disagreed with Atlantic Richfield, finding that the plaintiffs’ claims were not preempted and that the plaintiffs were not PRPs (and therefore did not require EPA approval for their restoration plans). Those rulings reached the Montana Supreme Court, which affirmed. Atlantic Richfield then sought relief in the U.S. Supreme Court, which affirmed in part and vacated in part.

After disposing of a procedural question, the Supreme Court analyzed Section 113(b) and Section 113 (h), and determined that state courts retained jurisdiction to hear state law claims for restoration damages. However, in trying to harmonize these two CERCLA provisions, the majority, and the two opinions that concurred in part and dissented in part, had to address the interplay of two seemingly unharmonious provisions to reach their different conclusions on the jurisdictional question. Notably, Justice Alito presented arguments in his separate opinion (which concurred in part and dissented in part) that the Court should refrain from going down this path. He would have stopped short of reaching the question of whether state courts have jurisdiction to entertain “challenges” to EPA-approved CERCLA plans. Justice Alito explained, “I would not decide that question because it is neither necessary nor prudent for us to do so.” Indeed, since the Atlantic Richfield decision, a number of commentators have already pointed out many tough questions that arise from the Court’s holding that state courts have jurisdiction to hear state law restoration claims.

The Court then found that the plaintiffs were in fact PRPs because they met the definition of “covered persons” under Section 107, which includes any “owner” of a “facility.” A “facility” includes “any site or area where a hazardous substance has been deposited, stored, disposed of, or placed, or otherwise come to be located.” Because arsenic and lead are hazardous substances that have “come to be located” on the plaintiffs’ properties, the plaintiffs are properly classified as PRPs. The plaintiffs’ claim for restoration damages constituted a “remedial action” and, because plaintiffs were PRPs, their restoration plan had to be authorized by EPA under Section 122(e)(6). Without EPA first approving the plaintiff’s restoration plans, the Court found that it need not address the question of whether those plans were preempted by CERCLA, leaving that issue for a future lawsuit.

A core purpose of CERCLA is to encourage PRPs to enter into settlements among themselves and the government with the goal of cleaning up contaminated properties efficiently. Actual CERCLA disputes frequently become long, expensive and immensely complicated, but the settlement goal remains front and center, including for PRPs, who generally shoulder the brunt of the costs.

Atlantic Richfield attempts to support the settlement goal in some respects. For instance, casting the ‘PRP net’ wide enough to include homeowners in the Superfund site where hazardous substances have “come to be located” could effectively channel all or most of the interested parties into the comprehensive Superfund decision making process. As noted by the Court, EPA has a longstanding policy to not pursue homeowners who did not cause or contribute to the pollution. Thus, possibly, the Atlantic Richfield decision will cause EPA to reach out to similarly situated homeowners directly, thereby ensuring such homeowners have every opportunity to be included in the administrative process. Even without this extra step, however, EPA places all key CERCLA actions out for public comment prior to making decisions; as such, homeowners impacted by a Superfund site already had and have opportunities to utilize the existing process. Certainly, similarly situated homeowners have an upside and no downside by engaging in the existing administrative Superfund process.

Fortunately, in an apparent effort to develop a compromise ruling, the Court required that EPA approve any proposed restoration plan in this context. But the specter of a state court remediation effort (in addition to all CERCLA obligations) raises a number of unanswered questions, including as to finality and the extent of contribution protection for a party working with EPA under a consent decree.

A PRP negotiating with EPA over obligations at a Superfund site may be able to help close doors potentially opened by Atlantic Richfield by including certain language in the consent decree with EPA. The EPA utilizes a template, the Model Remedial Design/Remedial Action Consent Decree (“Model CD”), which is available on EPA’s webpage. The Model CD, among other things and once fully executed and implemented, provides contribution protection under CERCLA Section 113(f). Although EPA tries to resist much deviation from to the Model CD template, it could prove helpful to seek to add additional language in the CD. Presumably, the EPA would generally be inclined to reject any additional remediation homeowners on a site may propose beyond the balance already struck by the EPA in its “comprehensive” Superfund resolution. However, and hopefully only for “belt and suspenders,” it could be helpful to add something to the Model CD such as the following:

This language, or language to this effect, would of course have to be proposed to and negotiated with the EPA. Hopefully, the EPA could be convinced to include the gist of this point into a consent decree. While Atlantic Richfield focused on statutory CERCLA interpretations technically only applying to sites on the CERCLA National Priorities List (NPL), it would seem prudent for PRPs’ counsel to try to negotiate this same commitment in non-NPL consent decrees from EPA – namely to have EPA agree to decline to authorize any cleanup efforts or restoration efforts sought beyond those addressed it the consent order.

Better yet, the EPA should consider adding the proposed language into its Model CD. The EPA gives up nothing by doing so and presumably such a provision would help maintain the EPA as the ultimate decider of appropriate remediation. By nipping some state claims in the bud, such a provision in the Model CD also would help to ensure finality. These are just some of the considerations and issues arising from the Supreme Court’s most recent CERCLA ruling.

If you have questions regarding this article, Superfund, environmental enforcement or environmental compliance generally, please contact Ed Cohen or Tim Briscoe in Thompson Coburn’s environmental practice area, or any other members of our practice group.