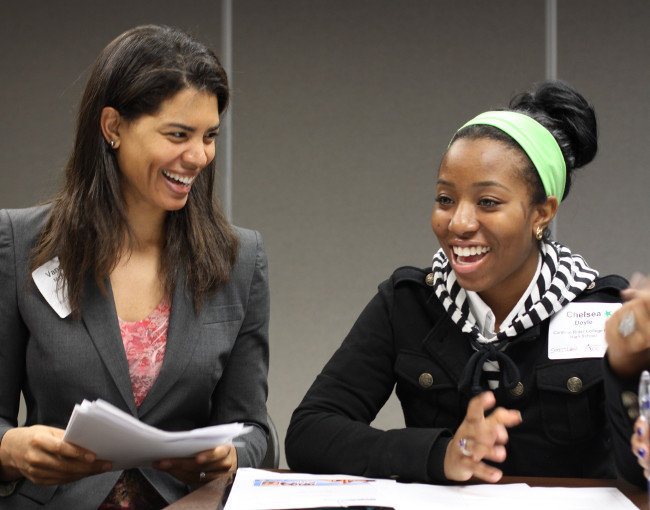 The road to a legal career isn’t always smooth. Sixty-eight students from Cardinal Ritter College Prep learned that lesson quite literally on March 16 when one of their buses broke down on the freeway en route to a unique legal education program called Street Law.

After a brief delay, the buses pulled up at the Fenton headquarters of UniGroup, Inc. The students tumbled out and then embarked on a day-long conference intended to spur in them an early interest in the law. The jam-packed day proved that the lessons they learned there — and the connections they made with St. Louis corporate attorneys — were worth a few bumps in the road.

Thompson Coburn sponsored the conference, which was part of a months-long educational law program that connects corporate attorneys with diverse high school students. The firm also hosted a January training session at the Thompson Coburn Conference Center for 20 program volunteers, who are members of the St. Louis chapter of the Association of Corporate Counsel.

Those local Association of Corporate Counsel members led Cardinal Ritter students in several legal exercises. They tackled a  hypothetical contract dispute between Beyoncé and the Scott Trade Center, and searched the U.S. Patent Office database while brainstorming trademarks for a new cellular device.

Lee Arbetman, the national executive director of the Street Law program, attended the conference at UniGroup.

“This program featured a perfect storm of three factors: Outstanding chapter leadership in Jan Alonzo, motivated and well prepared volunteers from the St. Louis ACC chapter, and the perfect school partner in Cardinal Ritter,” Arbetman said. “These students are smart, well-behaved and heading for college and leadership roles in their communities.”

He noted that at the conclusion of the program, Alonzo took a poll of the assembled students. “How many of you are now seriously considering careers in the law?” she asked. Nearly half of the students shot their hands up, Arbetman said, “which came as quite a surprise to the teachers who were with them on the trip.”

The program marked the first time the St. Louis chapter of the ACC has partnered with Street Law. It’s also unique among similar programs across the country because of the number of students involved.

“We’re proud to support the ACC’s effort to connect St. Louis corporate counsel with the energetic, motivated students at Cardinal Ritter,” Wuller said. “We hope the program at UniGroup expanded the students’ understanding of the type of work lawyers do, and fueled their interest in possibly joining the legal profession.”