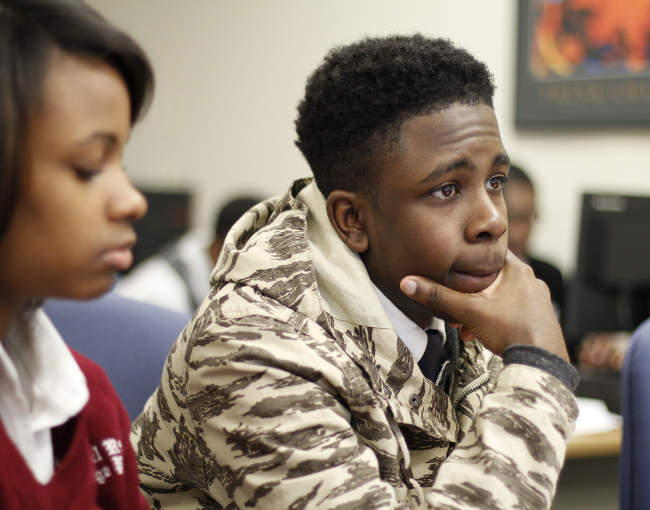 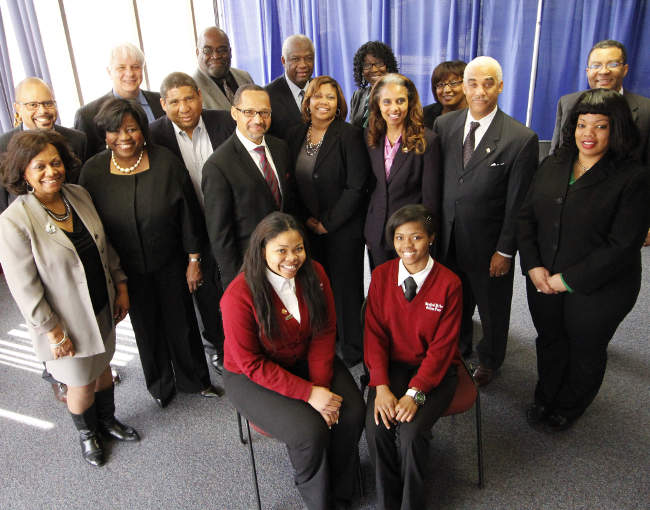 A distinguished group of judges and lawyers — including two Missouri Supreme Court judges — had lunch with the students.

Mary Karr is getting grilled.

Karr, the senior vice president and general counsel of the Federal Reserve Bank of St. Louis, is playing the part of a call center employee who claims she was fired because of her disability. A pair of students from Cardinal Ritter College Prep stare down Karr across the table and fire another question. “What were your reasons for being late to work?”

As Karr comes up with an answer, another student playing the part of her attorney jumps in. “You tried to be on time, but you were in pain, weren’t you?” “Yes, that’s true,” Karr admits. The student nods earnestly. “That can be frustrating,” he says, every bit the sympathetic plaintiffs’ attorney.

This legal playacting served a higher purpose last week. It was part of the second annual Street Law Program, organized by the St. Louis chapter of the Association of Corporate Counsel. Held once again at the Fenton headquarters of UniGroup, this year’s workshop was attended by 70 students from Cardinal Ritter. Last year about 68 students participated.

That makes the St. Louis program one of the largest Street Law Programs in the U.S., said Jan Alonzo, senior vice president and general counsel at UniGroup, and president of the St. Louis ACC chapter. “The goal is to really generate an interest among students in a career as an attorney,” Alonzo said. “But even if the students don’t go to law school, they’re having a positive experience with the law and with lawyers.” That positive experience extends to the opportunity to eat sandwiches with not one but two Missouri Supreme Court judges.

After arriving at UniGroup on March 21 and grabbing some breakfast, the students were welcomed by Rich McClure, president of UniGroup and CEO of United Van Lines and Mayflower Transit. “The law influences everything we do, and the legal department is a key part of every business decision we make,” McClure said. “What you have today is a chance to explore one possible path for your future.”

In the employment law session, students wracked their brains for the best questions to ask an employee and employer on either side of a discrimination dispute. “Ask open-ended questions,” urged Nancy Tayborn, senior employment attorney at Wells Fargo. “Your job is to make the best argument you can make. So what questions would help you make that argument?”

In another session, students tackled a hypothetical contract dispute between Beyoncé and the Scott Trade Center. “There was a contract, and now there’s a dispute,” said Heather Paraino, Senior Specialist - Regulatory at UniGroup. “Going to court is an option, but it’s really expensive, and you might not win.”

“Figure out what you will settle for, but don’t tell the other side,” Paraino told the students. “It's a little like playing a game of cards. You can bluff.”

Another UniGroup attorney, Mark Volansky, sat down with a group of students to hash out their demands for the negotiation over the Beyoncé concert. Their priorities at the settlement table could change after hearing what the other side wanted out of the deal, he explained. “That’s what you as lawyers are trying to do,” Volansky said. “You’re trying to find common ground.”

Volansky asked the small group what they thought of the lawyering exercise. A student named Tiara spoke up. “I thought being a lawyer was boring and was a lot of writing, but this is fun.”

Once again, the students were joined at lunch by a number of prominent judges and lawyers, who talked to them about their jobs, and about the path to becoming a lawyer. The lunch guests included Missouri Supreme Court Judge George Draper III, former Missouri Supreme Court Judge Ronnie White, and Missouri Court of Appeals Judge Angela Turner Quigless. Thompson Coburn partners Booker T. Shaw and Bob Wallace also lunched with the students.