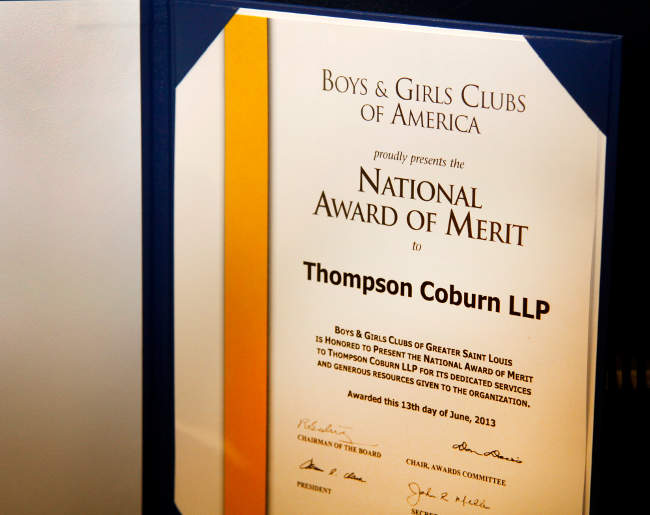 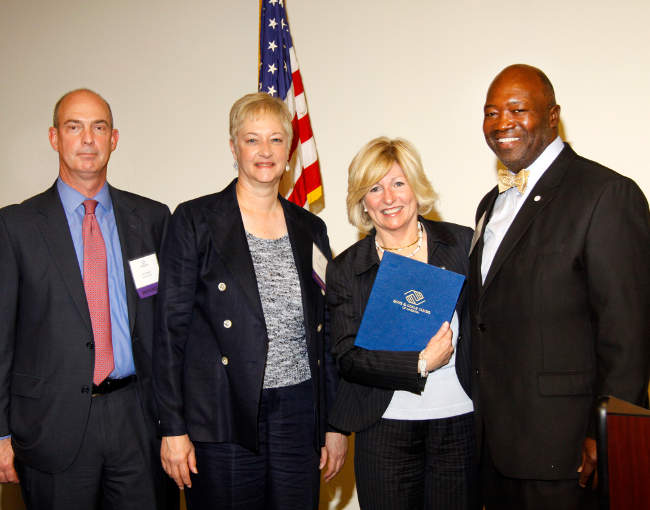 The Boys & Girls Clubs of Greater St. Louis honored Thompson Coburn with three awards at the organization’s annual recognition event on June 13. The firm received the honors for its pro bono efforts on a project that may result in a Club option to convert an 11-acre Superfund site into a significant expansion of the Boys & Girls Clubs’ location on North Grand Avenue.

The former site of the Carter Carburetor plant, the lot has been vacant since 1984 and is contaminated with poly-chlorinated biphenyls (PCBs) and trichloroethylene (TCE). Working with the City of St. Louis and U.S. Environmental Protection Agency Region 7, a team of Thompson Coburn attorneys is helping facilitate a transaction that could spur millions of dollars in cleanup over the next three to five years. The EPA is currently reviewing settlement agreements with the entities responsible for the cleanup.

For those efforts, the Boys & Girls Club of St. Louis honored the firm with a National Award of Merit and honored Thompson Coburn attorneys Peter Strassner and Anne-Marie Kienker with Capture the Vision Awards.

“The National Award of Merit recognizes outstanding support for the Boys and Girls Club,” said Flint Fowler, president of the Boys and Girls Club of Greater St. Louis. “Thompson Coburn’s fantastic pro bono work for our organization over the last year and a half speaks volumes about the firm’s dedication to the community. Thanks to the hard work of their attorneys and staff, we have embarked on a project that will greatly expand the services we can provide to thousands of  children in the St. Louis area.”

Business litigation partner Mary Bonacorsi, Strassner, the co-chair of the firm’s environmental group, and Kienker led work on the project. Thompson Coburn is negotiating and drafting multiple agreements to provide the Boys & Girls Club with the option to acquire and lease significant additional property following the planned cleanup. The firm is also working to further the Club’s efforts to facilitate that cleanup. Thompson Coburn attorneys worked extensively with the Club’s board members on the project, including Vern Remiger. Remiger is president of architecture, planning, and interior design firm Remiger Design, and has served on the board of directors for the Boys & Girls Club for more than a decade. He has provided the vision and instrumental, tireless support needed for the project.

“Peter and Anne-Marie are well-deserving of Capture the Visions Awards for their exemplary efforts on behalf of the Boys and Girls Club,” Fowler said. “Their responsive, creative legal work has built the groundwork for an exciting new development that we hope will provide a safe, healthy place for children to learn and grow.

“This is a historic effort for our organization, and it wouldn’t be possible without the inspiring dedication of attorneys like Peter and Anne-Marie.”