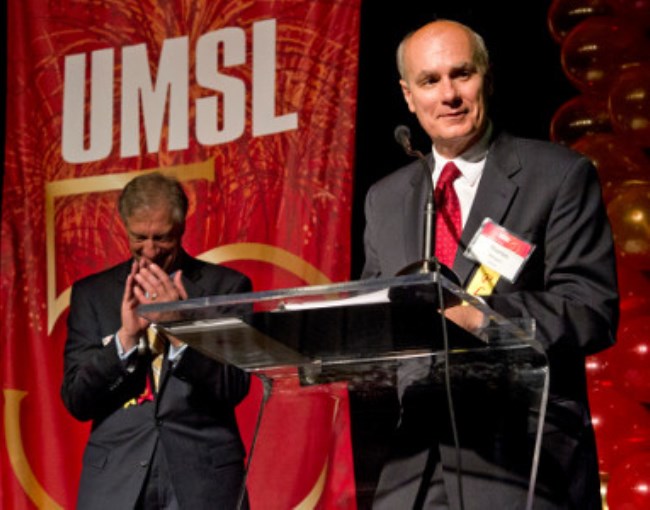 The event wrapped up a full year of anniversary festivities, including an extensive metropolitan advertising campaign featuring six distinguished alumni, including Tom. As part of  the campaign, Tom was featured on a billboard that was prominently featured above I-64 and rotated around the St. Louis area.

In his remarks at the Sept. 19 event, held at the Ritz Carlton and attended by a sold-out crowd of 800, Tom shared his experiences as the son of a disabled WWII vet whose family relied on veteran’s benefits.

“Not only was a private university not an option, going away to college wasn’t either,” Tom said. “Who could afford the room and board? Fortunately, thanks to the wisdom, the vision, and the foresight of our founders, there was a path to college for me. UMSL — just like it was for so many of you in this room and 85,000 others — was in the right place at the right time for me.”

The Jubilee Birthday Party also honored the recipients of the 2013 Distinguished Alumni Awards, which included the Hon. Frederick R. Buckles, a magistrate judge for the U.S. District Court for the Eastern District of Missouri; Gordon Heddell, former inspector general for the U.S. Department of Defense; and Opal Jones, president and CEO of Doorways.