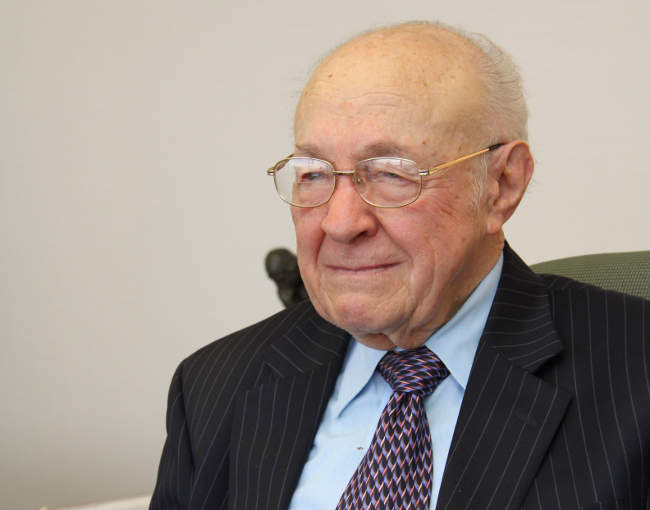 William G. (“Bill”) Guerri, who began his practice of law in 1946 and spent 68 years with Thompson Coburn LLP, passed away at his home in St. Louis on Tuesday, May 19. Bill served as managing partner of the former Thompson & Mitchell firm for more than 20 years, and is the namesake of the William G. Guerri Chair at Legal Services of Eastern Missouri, dedicated to providing pro bono legal services for children with special needs.

“Bill was an immensely important leader who was instrumental in making our firm what it is today,” said Thompson Coburn Chairman Tom Minogue. “He was dedicated to serving others, both as a mentor to generations of lawyers inside and outside of our firm and as a tireless supporter of pro bono activities. We are proud to have been led for so many years by this humble yet beloved leader in the St. Louis legal community, who served as a model for all that is best in our profession.”

Bill was born on March 30, 1921, in Higbee, Missouri. In 1935, Bill moved to Fayette, Missouri, to reside with his brother. He worked there as a shoe salesman during the depths of the Depression, and set his sights on lifting himself up and becoming a lawyer.

Bill graduated from Fayette High School in 1939 and in 1943 received his college degree from Central Methodist University. He was awarded a full scholarship to Columbia University School of Law in New York City, where he received his law degree in 1946. His first employment was with a large Wall Street firm. In 1947 Bill decided to continue his law career in his home state of Missouri, and joined the former Thompson & Mitchell firm in St. Louis. He became a partner in 1956 and eventually the firm’s managing partner, a position he held for over two decades until 1988.

Both a corporate lawyer and a litigator, Bill was a highly regarded attorney on both a local and a national level. His advice and counsel was sought by leaders of many of St. Louis’ largest companies, including Mercantile Bank (now U.S. Bank), Peabody Energy and Union Pacific Railroad. He was named to The Best Lawyers in America® for more than 25 years and in 2000 he received the American Judicature Society’s Herbert Harley Award for lifetime achievement in the administration of justice. Bill was active in a number of bar associations, including as a fellow of the American Bar Association and the St. Louis Bar Foundation, and as a member of the American Law Institute, the Missouri Bar, the Bar Association of Metropolitan St. Louis and the Association of the Bar of the City of New York.

Perhaps Bill’s most significant contribution to public service was his support of legal services for the poor. Bill was awarded the Pro Bono Publico Award of the Missouri Bar in 1991, the Lawyer of the Year Award of the Bar Association of Metropolitan St. Louis in 1995 and had his name placed on the Wall of Justice of Legal Services of Eastern Missouri. In 1993 Bill was featured in a lead article by Florence Shinkle of the St. Louis Post-Dispatch, entitled “A Pro at Pro Bono.”

Dan Glazier, the Executive Director of Legal Services of Eastern Missouri, lauded Bill as a wonderful man and dedicated attorney who will be dearly missed by the pro bono and charitable communities in St. Louis.

“Bill Guerri’s life was a testament to the importance of providing a helping hand to those in need,” Dan said. “In 2005, Thompson Coburn carried Bill’s legacy forward by funding the William G. Guerri Chair at Legal Services of Eastern Missouri. Funding for this chair over the last decade has provided legal representation to ensure that nearly 300 children with special needs have received the critical educational services so important to their lives.”

Bill also was heavily involved in a variety of civic organizations. He served as a Curator of Central Methodist University from 1981 to 1997, as Chairman of the St. Louis Chapter of the American Heart Association, and as legal counsel for the United Way of Greater St. Louis.