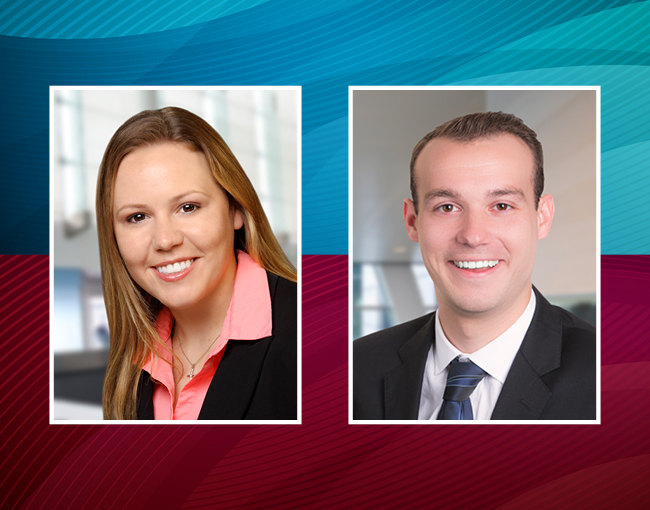 Jesse Doggendorf and April Kirkley named to 2022 Up & Coming list

This honor recognizes early-career lawyers who are making a positive difference in the practice of law in Missouri and whose outstanding contributions have them on the track for success.

Jesse started as a summer associate at the Firm in 2015 as a recipient of the Thomas F. Eagleton Scholarship, a special scholarship given annually by the Firm to law students from populations underrepresented in the legal profession. Jesse joined the Firm as an associate in 2017. He assists corporate clients with a wide range of transactional matters, including mergers and acquisitions, securities offerings, corporate governance and general business counseling. Since 2018, Jesse has assisted in registering the annual limited partnership offerings for a major financial services firm under its employee equity purchase plan.

As a member of Thompson Coburn's Sweepstakes Law group, Jesse assists clients on regulatory issues and proceedings related to sweepstakes, gaming and other corporate promotions, and drafts official rules for such promotions. He has prepared sweepstakes, contest official and abbreviated rules for clients in a variety of industries, including an American multi-national fast food restaurant franchise well-known for submarine sandwiches.

In addition to his career achievements, Jesse has been recognized for his pro bono and community service efforts. He serves on the board of Pride St. Louis and also teaches a course on Civil Rights and Civil Liberties at Saint Louis University. Through Thompson Coburn, Jesse has assisted with a number of clients that have started nonprofits in Missouri under pro-bono or low fixed-fee arrangements.

April joined Thompson Coburn in 2016 after serving as a health care executive with the VA St. Louis Healthcare System. As a member of Thompson Coburn’s growing national health care practice, she draws on her firsthand experience as a health care administrator to assist a variety of health care entities with a full range of transactional and regulatory matters. In addition to contributing to the development of an acquisition strategy for one of the largest Catholic health systems in the country, April recently assisted her health care clients with acquiring physician practices, negotiating service agreements and responding to governmental inquiries.

Jesse and April were previously named as “Ones to Watch” from Best Lawyers in America for 2022 and 2023.

Even with a full workload as a busy attorney, April still finds time to give back to her Firm and the community. She actively participates in various mentoring programs for junior attorneys, currently serves on the board of the Veteran Research and Education Foundation of St. Louis and volunteers for activities at Immanuel Lutheran Church.

Jesse and April, alongside the other Up & Coming winners, will be recognized at an awards luncheon on October 14 at the Ameristar Casino Resort Spa in St. Charles.