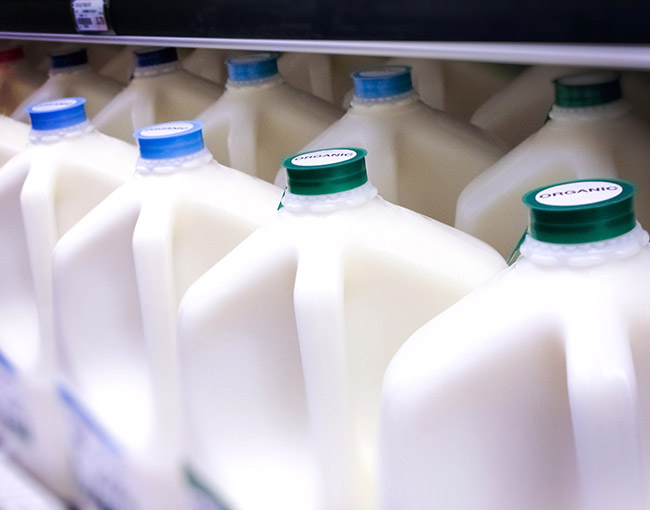 The federal district court for the Northern District of California recently dismissed a putative class action lawsuit, which alleged that Horizon Organic milk containing “DHA” violated California’s unlawful and unfair business practices laws. In Brown v. Danone North America, LLC, plaintiff Brown alleged that she purchased Horizon Organic milk about once a week for a year. She claims that before she bought the milk, she read and relied on the labels which clearly state that the milk is “organic” and that the milk contains DHA, short for Docosahexaenoic acid, which is alleged to be a fatty acid added to milk for “brain health.” The labels also bore the United States Department of Agriculture (“USDA”) organic certification logo. Brown claimed that the milk’s label was misleading because it couldn’t really be organic if it contained DHA. Based upon this alleged misstatement, Brown claimed she repeatedly purchased the milk.

In analyzing whether Brown’s lawsuit was viable, the court noted that the USDA database publicly lists Horizon Organic milk with DHA as currently certified organic by the USDA, and has been since 2013. Despite that USDA designation, Brown alleged that only certain additives, not including DHA, may be added to organic food products and, therefore, the labeling and advertising of the milk as organic is false and misleading. “Brown ‘would not have purchased the products or would not have paid the price she paid,’ had she known the milk was not organic.”

The court focused on the Organic Foods Production Act (OFPA), which directs the USDA to establish an organic certification program for producers and handlers of agricultural products that have been produced using organic methods.

Only certified products may bear the USDA organic logo. USDA certifying agents examine “all substances or materials used in the production or handling process” to determine whether the final product is organic.

The court first held that Brown’s claims were impliedly preempted by the federal certification scheme. As the court explained, where state law claims stand “as an obstacle to the accomplishment and execution of the full purposes and objectives of Congress, as laid out in a comprehensive federal regulatory scheme, those claims are impliedly preempted by that federal scheme.” The court recognized that the Ninth Circuit had not yet analyzed whether the OFPA preempts state law claims which call into question whether organic products were properly certified as organic.[1] Here, the court held that Brown’s claim seeks to challenge the certification itself, and was, therefore, preempted under OFPA.

Brown’s state law claim that the certified organic milk is not really organic directly conflicts with OFPA’s primary purposes: (1) a uniform national standard, and (2) exclusive federal enforcement of such standard … “There is simply no way to rule in [Brown’s] favor without contradicting the certification decision, and, through it, the certification scheme that Congress enacted in the OFPA.” … Accordingly, Brown’s claims are preempted by the OFPA certification scheme, and her claim is dismissed.

As we reported previously, the California Supreme Court considered the narrow question of whether federal law preempts a state false advertising claim that a certified grower of organic food intentionally mislabeled a conventional product as organic. In this narrow circumstance, the Court answered: “no.” Quesada v. Herb Thyme Farms, Inc., 62 Cal.4th 298 (2015). Here, plaintiff  Brown actually attacked the USDA’s designation of “organic,” which formed the basis of the court finding there was preemption.

The court also held that Brown’s claims failed because she did not have standing to pursue her claim. In analyzing this aspect, the court held “the Court concludes that Brown must allege a misrepresentation that (1) she actually relied upon and (2) caused economic loss to demonstrate statutory standing for all of her claims.” Citing another decision, the court held that a plaintiff lacked standing where she read the label and the label disclosed all the facts that plaintiff challenged as misleading. Brown tried to circumvent that holding by arguing that her claim was not that she did not know the milk had DHA, but “rather that she believed the milk was organic based on its label, but its DHA made it not organic.” The court called Brown’s argument “circular,” and held that it did not save her claim. Brown’s allegation that she read the milk carton which represented that the milk was organic and that based upon that representation, she purchased the milk led the court to hold that “ because the label prominently disclosed the presence of DHA, she did know all the relevant facts.”

Despite the problems with Brown’s complaint, the court did give her an opportunity to amend her complaint to cure the defects identified in its opinion.

We’ve blogged on Organic Food Production Act preemption in the past. Please click the links below to read past posts on this issue.

Jeff Brown is a partner in Thompson Coburn’s litigation practice.

[1] The court did note, however, that the Eighth and Second Circuits did hold that such challenges were preempted.