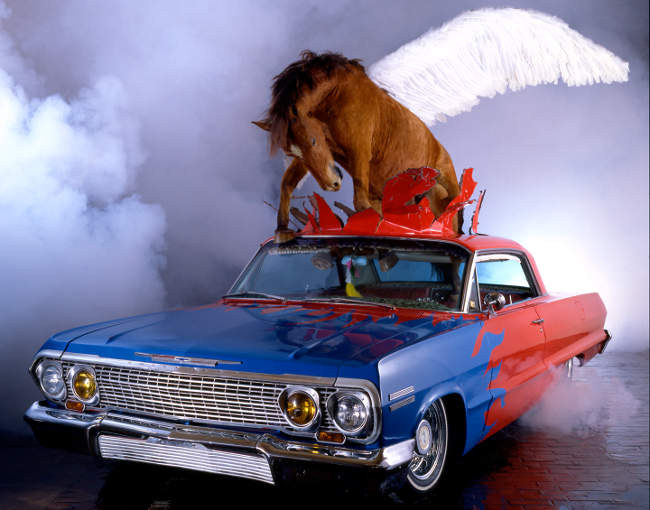 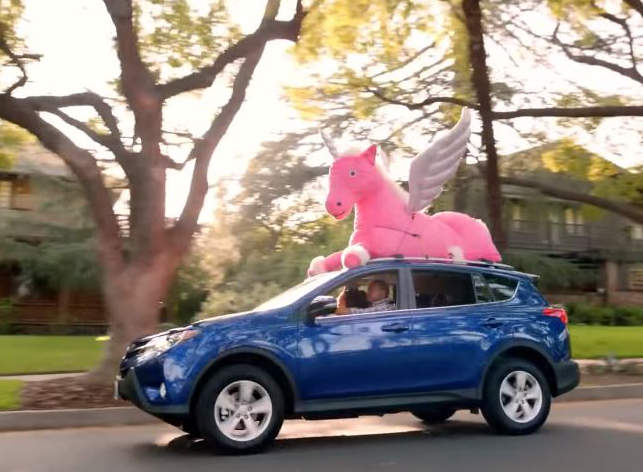 The analysis in an art copyright case can sound like a class discussion in Art Appreciation 101. Take the case of Croak v. Saatchi & Saatchi, which could also be called Pegasus I v. Pegasus II.

The visual artist James Croak owns the copyright in his 1983 sculpture, “Pegasus, Some Loves Hurt More Than Others,” pictured at top, which depicts a winged horse breaking through the roof of a sleek lowrider. Croak sued Toyota and its ad agency, which had created a set of Toyota RAV4 ads that showed that car transporting a massive pink stuffed animal, a hybrid of a unicorn and Pegasus. (Screen shot from car commercial above.)

The artistic comparison fell to Judge Jed Rakoff, of the U.S. District Court for the Southern District of New York, who granted Toyota’s motion to dismiss, on the grounds that the two works were not substantially similar for purposes of copyright law.

Judge Rakoff initially noted that the idea of a stuffed Pegasus, even juxtaposed with the roof of an automobile, couldn’t form the basis for a copyright claim. Copyright doesn’t protect ideas, concepts or facts. So he had to strip the basic concept, of Pegasus on a car, out of his analysis, and focus solely on the two different creative expressions.

Judge Rakoff concluded that “there is almost nothing similar” in artistic expression between the two works. Croak’s work, he found, was a “strikingly realistic and life-like” depiction of what appeared to be an actual horse with wings affixed to it. The Toyota commercial, by contrast, featured “a pink, smiling, oversized stuffed animal,” “not remotely realistic or life-like.”

Even broadly looking at the total concept and feel of the two works, he found them so different that no jury could reasonably find them substantially similar. Croak’s sculpture felt like a living animal, the Toyota ads like a child’s toy. Croak evoked “raw power, independence, and escape,” and “depicts the supernatural by animating a mythological creature.” The Toyota ad simply evoked “light-hearted and playful” “feelings of warmth, family and fun.”

Judge Rakoff’s opinion even includes a side analysis of lowrider culture — a collateral point that might, in Art Appreciation class, have qualified him for extra credit. Essentially, Croak’s use of the culturally significant half-red, half-blue lowrider that “exudes cool” further distinguished his work from the Toyota commercial, involving “a modern family-friendly SUV in glossy blue” (apparently, not cool at all).

As modern communication moves from words to visual content, including photographs, interpretation of art is becoming increasingly important in copyright law. Copyright lawyers may need to dust off their Art Appreciation textbooks.