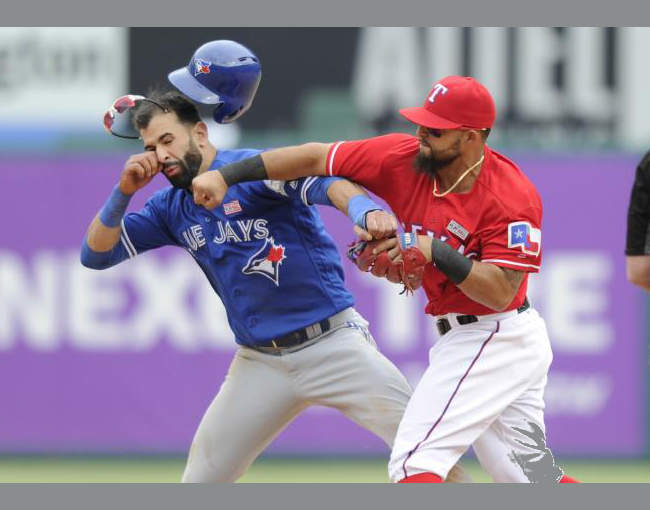 One of the best sports photographs in recent history captured a 2016 incident where Texas Rangers’ second baseman Rougned Odor hit Toronto Blue Jay José Bautista in the face. That memorable image is at the center of a new copyright lawsuit filed in federal court for the Southern District of New York.

The photograph – obtained from Court records – was one of several of the incident that went viral in the Internet's schadenfreude joy over Bautista – a/k/a Joey Bats – getting hit. (Bautista might be one of the best players in baseball, but he is clearly a controversial figure.) Odor was apparently still incensed about Bautista showing up the Rangers with an epic “bat flip” following his home run in a 2015 American League Division Series playoff game between the same two teams.

Texas-based photographer Rogelio Pena published his photograph on a Cal Sport Media website the day it was taken. Pena later found 12 copies of his photograph for sale in the website’s online store. In a copyright suit against the owner of the site, he alleges the website informed visitors that all site images were for editorial use only. Pena further alleges he was credited as the copyright owner on the website, and timely registered the photograph with the Copyright Office.

Pena asserts he did not license the photograph to Celebrities Unlimited (which does business as “Field of Dreams”), and that his copyright management information (CMI) was removed in violation of Section 1202 of the Digital Millennium Copyright Act. CMI is information on or associated with a work that provides information that allows viewers and readers to identify the copyright holder; this could include the title of the work, name of the author, the copyright owner, a telephone number, and Internet links to additional information. 17 U.S.C. § 1202(c).

He seeks $150,000 in statutory damages for the alleged willful copyright infringement, plus $25,000 for the removal of his copyright management information.