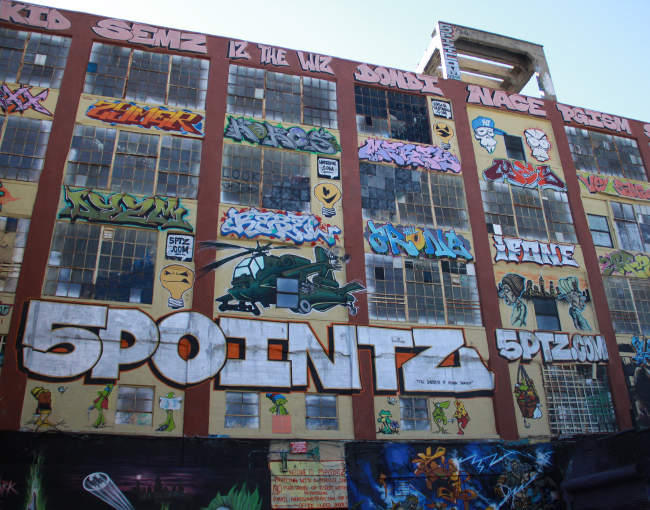 Will a court recognize ‘aerosol artists’?

You may think of it as “graffiti,” but a court in New York must determine if “aerosol art” is “meritorious” and of “recognized stature” such that it gets special copyright protection.

Twenty-three graffiti artists filed a claim under the Visual Artists Rights Act (VARA), against a building owner, alleging the owner violated their rights when he painted over their graffiti in 2013. The artists originally used the walls of Gerald Wolkoff’s Long Island City building, nicknamed 5Pointz, without permission. But Wolkoff later invited them to continue with their graffiti, which one of the current Plaintiffs curated.

Eventually, numerous works adorned the warehouse, some created by artists who have had their creations used in advertising campaigns for Heineken and Deutsche Bank.

Wolkoff, however, began to paint over the graffiti in 2013. The artists moved for a temporary restraining order, alleging their works were protected under VARA, and that Wolkoff had not provided them with the required 90-day advance notice of removal. The artists’ motion was denied, and the warehouse was demolished to make way for condominiums, although the underlying VARA claim continued.

Wolkoff recently moved for summary judgment, claiming the graffiti art didn’t qualify for VARA protection. VARA protects works of visual art that are of “recognized stature,” generally meaning the art is “meritorious” and the stature is “recognized” by art experts, other members of the art community, or by some cross section of society. As one commentator has pointed out, different people have different views of “aerosol art.”

Judge Frederic Block of the Eastern District of New York denied Wolkoff’s motion, finding disputed fact issues as to the merit of the art. He cited to the great number of media reports about the plaintiffs’ works, the public’s reaction to their threatened destruction in 2013, the Heineken and Deutsche Bank collaborations, and a disagreement among art experts.

The case will proceed to a jury trial on the artists’ VARA claim, including the disputed factual issue of the works’ recognized stature. If they are successful, the plaintiffs will be entitled to actual or statutory damages. The court has not set a trial date.

Photo credit: “5 pointz” by meesh is licensed under CC BY 2.0. The original photo was cropped to fit this page.