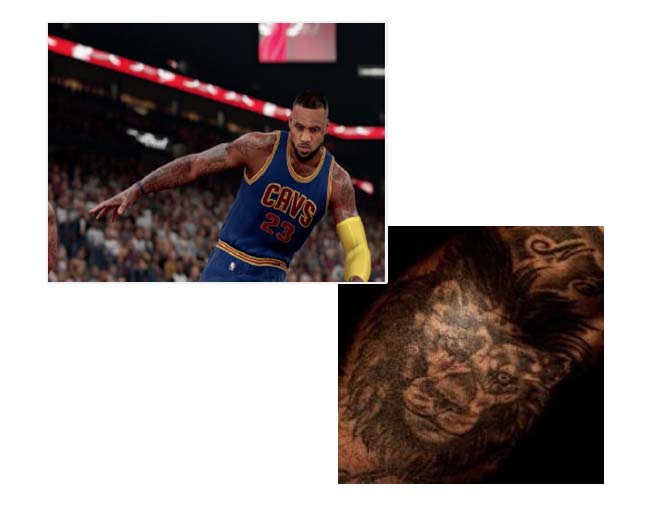 Fair use blocks out copyright claim over LeBron’s tattoo

Courtside questions: Is it fair or foul to show a player’s tattoo in a video game? LeBron James is a talented individual: three-time NBA Champion; 13-time NBA All-Star. And he gave a more than respectable performance playing himself in the movie "Trainwreck."

He also sports several tattoos, one of which – the Lion’s Head Tattoo – was created by an artist who assigned his copyright rights in the tattoo to Solid Oak Sketches. Solid Oak sued Take-Two Interactive Software for copyright infringement last year, claiming it is a technical foul to display the copyrighted tattoo on LeBron’s arm in Take-Two’s popular NBA 2K line of video games. LeBron’s “Lion’s Head” tattoo (one of several Solid Oak tattoos at issue in the lawsuit), as it appears on his right arm, and as depicted in the video game, is shown above (photo and illustration credits: court file).

Playing a zone defense, Take-Two moved to dismiss Solid Oaks’ statutory damages claims because its copyright registrations were untimely. Solid Oak did not register the tattoo copyrights with the U.S. Copyright Office until 2015 – two years after Take-Two released NBA 2K13, its 2013 version of the videogame, and the first that depicted LeBron and others players with the Solid Oak tattoos.

Solid Oak admitted its 2015 registration post-dated the 2013 alleged infringement, but claimed there was no shot clock violation because Take-Two’s 2016 release of NBA 2K16 constituted a separate act of copyright infringement for statutory damage purposes. Judge Laura Taylor Swain of the Southern District of New York disagreed, finding Solid Oak’s argument was a flop under Section 412 of the Copyright Act, which she determined set a “bright-line rule [precluding] statutory damages and attorneys’ fees when there is any infringement before registration.”

Take-Two then went on offense, asking the Court to declare the videogame’s display of the copyrighted tattoos was allowed as either a fair use or de minimus use. According to Take-Two, displaying LeBron’s tattoos cannot be copyright infringement: “If Solid Oak were correct, it would mean that anyone appearing in public, on a television program, or in an advertisement would need to license the display of their tattoos. This is not the law, and if it were, it would be an encroachment on basic human rights.” Solid Oak rebounded, asking the Court to strike Take-Two’s fair use and de minimus use counterclaims because they were identical to Take-Two’s affirmative defenses to Solid Oak’s complaint.

Last month, Judge Swain rejected (with authority) Solid Oak’s argument and allowed Take-Two’s declaratory judgment counterclaims to proceed, finding they were not legal air balls, despite their similarity to Take-Two’s affirmative defenses. Judge Swain determined the counterclaims constituted independent causes of action because Take-Two “has a substantial interest in the resolution of the de minimus use and fair use” issues, and, given the threat of future copyright infringement claims, a court resolution should be a lay-up because it would “offer relief from uncertainty” in this area of copyright law.

This legal issue was raised – but not resolved – in prior copyright infringement lawsuits, including a 2011 lawsuit by the tattoo artist who drew Mike Tyson’s tattoo that was imitated on actor Ed Helms’ face for the movie "The Hangover 2." Judge Swain’s decision clears the lane for a final decision on this issue.