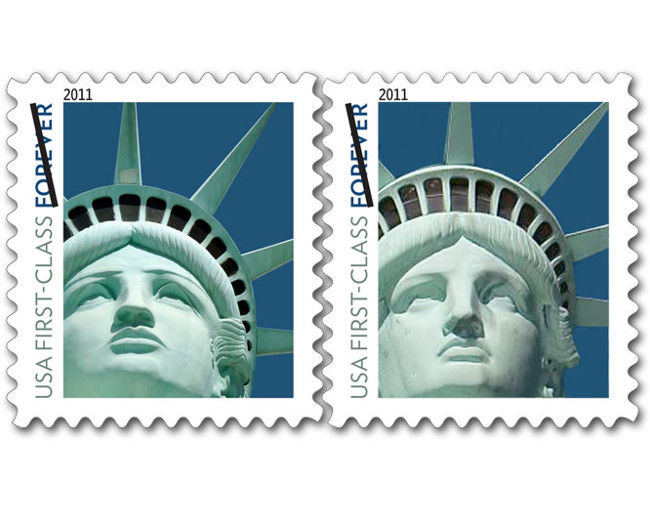 That’s one of the lessons from the recent court decision sending a copyright case against the United States Postal Service to trial, but there are more. The decision can serve as a teaching tool and warning regarding use of photos and other images.

The case involves two Statues of Liberty — the original in New York harbor, and the imitation at the New York-New York hotel in Las Vegas. The imitation looks a lot like the original, but, according to its sculptor, appears more “fresh-faced” and “sultry,” “more feminine,” and “much poutier” than the original.

The Postal Service produced a Statue of Liberty stamp in 2010, using a photo that appeared to be the head of the original statue. In fact, the image portrayed the imitation. So the sculptor of the imitation, Robert S. Davidson, sued for copyright infringement since his sculpted head was the ultimate basis for the image on the stamp.

In a preliminary decision, the U.S. Court of Federal Claims denied summary judgment motions on both sides, thus sending the case to trial. The decision highlights some use copyright principles for everyone who works with images:

Take care even with public domain materials, because variations and added new creative content can be copyrightable. The Statue of Liberty, designed by Frédéric Auguste Bartholdi and dedicated in 1886, is a public domain work. But photos and imitations of it can add new copyrightable creative content—for example, the framing and lighting captured in a photo, or the new “sultry” look that Davidson claimed to add in his Las Vegas imitation.

The threshold for copyrightable creativity is low. The Postal Service contended that Davidson’s variations from the original were too subtle to warrant copyright protection. But the court sent that issue to trial, because of the low legal threshold for copyrightable creativity, and fact issues like the extent to which the differences were dictated by necessity rather than artistic choice.

Image copyright cases are on the rise. Most people primarily associate copyrights with books, movies, and software. But the biggest growth in copyright litigation involves images. Each artwork or photo usually constitutes its own “work,” which often gives plaintiffs a basis for seeking huge damage awards when multiple images are used. And images are usually used in their entirety, not through excerpts as with books and movies, thus preventing the defendant from using one of the customary fair use arguments, that only a small portion of the work was used.

Fair use is subjective and fact-intense. The court refused to grant summary judgment to either party on the Postal Service’s fair use defense. It found fact issues about the significance of the use of an image so close to the original, and its commercial effect on Davidson. Even as fair-use precedents accumulate, the doctrine can be hard to apply in new situations.

Copyright issues arise everywhere today. Copyright cases used to arise mostly with book publishers and commercial producers of audio and visual works. But two developments changed that: digital technologies gave everyone the ability to reproduce and distribute creative works, and increased awareness of the strength of copyright claims led more widespread assertions of copyright claims. Even business and governmental users of creative content need to carefully address copyright issues. (This isn’t the Postal Service’s first big copyright case; it was hit with a $540,000 judgment for using a photo of the Korean War Memorial without authorization.)