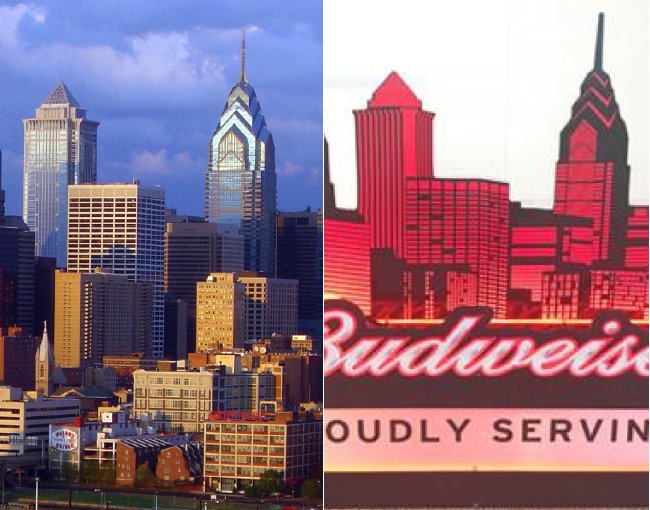 Both cases began with attractive photos of the photographer’s home city skyline – Indianapolis as taken by lawyer Richard Bell, and Philadelphia as taken by photographer Bradley Maule.

But the alleged infringing uses were starkly different. In Bell’s case, Bell v. ROI Property Group Management, LLC, Bell’s Indianapolis skyline photo was used in its entirety, without authorization, on the website of a commercial property management company.

Bell, an amateur photographer, won, and won big. He was able to prove willful infringement because the defendant had earlier infringed the same photo, and in its second round, the defendant even marked the photo with a false copyright notice, essentially claiming Bell’s photo as its own. Based on these facts, and the defendant’s lack of cooperation in the litigation, the court awarded Bell $150,000—the maximum amount of statutory damages, allowed only in cases of willful infringement.

Maule’s case, Maule v. Anheuser-Busch, LLC, came out differently, even though the photographer was a professional and the claimed use involved advertising by a giant company. Maule’s photo started as a sunset landscape photo of Center City Philly. He then enhanced it with digital images of two yet-to-be-built buildings—one of which, Mandeville Place, was never built.

Maule claimed his photo was infringed by an Anheuser-Busch neon sign that he saw in the window of the Spruce Street Market. Like his photo, the neon sign portrayed the Philly skyline, and included the two buildings. Maule latched onto the sign’s inclusion of the non-existent Mandeville Place and claimed the sign copied and infringed his photo.

Anheuser-Busch didn’t dispute that Maule’s photo was available before it created the sign. But even if they had copied from the photo, they claimed that no infringement occurred, because the photo and the sign weren’t substantially similar.

The court agreed that the two works weren’t similar, and its decision pointed out the many dissimilarities, including the sign’s cartoon-like non-detailed style, its different sense of scale and depth, and its highlighting and shadows. Ultimately, the court concluded, “Despite some similarities, most of which relate to non-copyrightable aspects of Maule’s photograph, no reasonable juror could find that the Defendants’ sign is substantially similar to the protected elements of Maule’s photograph or find that both works share the same aesthetic appeal.”