Home > Insights > Blogs > Sweepstakes Law > What is the message of the film 'Nebraska' for sweepstakes creators? 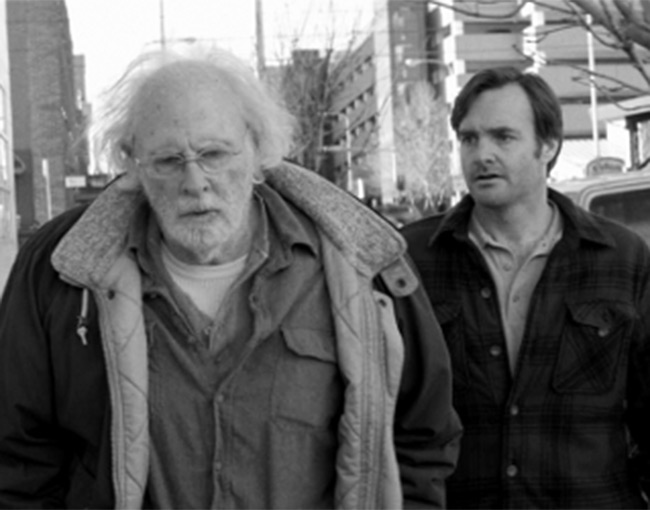 What is the message of the film 'Nebraska' for sweepstakes creators?

“Does your dad have Alzheimer’s or something?”

“No, he just believes what he is told is true.”

That paraphrased dialogue from the movie Nebraska takes place between the son of an elderly man (who believes he has won $1 million in a sweepstakes) and an employee at the promotions company that created the sweepstakes. Bruce Dern, who portrays the father, received a letter telling him that he would receive the $1 million prize. The letter included a picture of a check made out in his name $1 million dollars.

Dern’s character is so convinced he has won that the movie opens with Dern walking down the side of a frozen Montana highway, determined to trek to Nebraska to collect his million-dollar prize. The story moves on with his son, played by Will Forte, joining Dern on the trip from Bismark, North Dakota, to Lincoln, Nebraska.

The Film Critic Department of the Sweepstakes Law Blog gives this movie 5 “Sweeps” out of 5 and strongly recommends that anyone involved in designing, creating, or sponsoring sweepstakes see this movie. Whether you are involved in sweepstakes or not, it is an enjoyable movie, as recognized by the nominations it, its director and stars have received for Golden Globe and Academy Awards.

The story is at times hilarious, but more often quite serious as the 84-year-old man, who may be losing some of his mental capacity, is convinced that he has won a sweepstakes because of a letter he received from the sweepstakes’ sponsor. The story is fictional, but the fact that most people have at some time received a vague or misleading letter that they “may have already won!” a sweepstakes makes the movie all the more believable.

I suspect the those who prepare such letters realize that most recipients throw it them the trash; few take the time to read the hard-to-find fine print that informs that they haven’t actually won anything until their name, code number, or other entry information has been selected. However, there is a significant percentage of people who, because of their age, health, mental condition, or education, may have difficulty understanding the actual details of such sweepstakes.

I am certain that no one reading this blog intentionally creates sweepstakes designed to confuse or mislead potential entrants into entering the sweepstakes (and making some type of purchase to do so). And I believe Nebraska does a good job of exposing those people for their shameful deeds. But I also believe that the movie has a message for all of us who are involved in legitimate sweepstakes and contests. We have a responsibility to make certain that the details of our promotions are described and promoted in “clear and conspicuous manner” (to use an FTC term) and to make certain that all of the terms and conditions contained in our the rules are understandable to all who may want to participate.