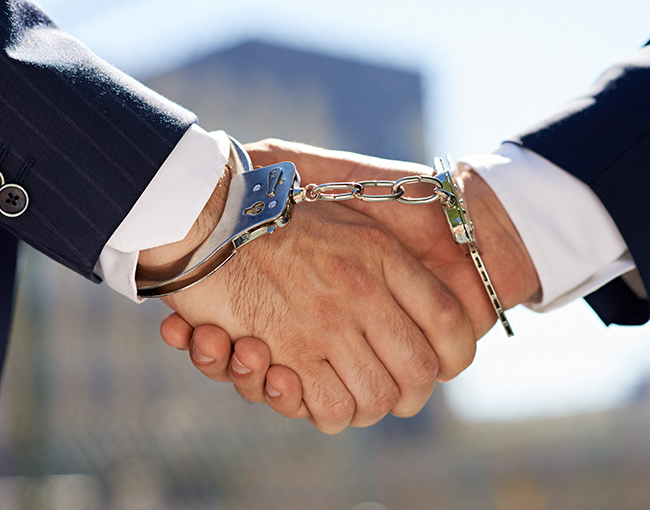 Agreements to refrain from soliciting another company’s employees (“no poaching” agreements) recently came under increased scrutiny — including the ominous potential for felony charges.

A year ago, under the Obama Administration, the Department of Justice and the Federal Trade Commission released a coauthored document, “Antitrust Guidance for Human Resource Professionals” (the “Guidance”), that raised the ante to criminal status for companies or individuals that pursue “no poaching” agreements, stating: “[T]he DOJ will criminally investigate allegations that employers have agreed among themselves on employee compensation or not to solicit or hire each others’ employees.”

Any speculation that the Trump Administration would discard the Obama-era guidance was refuted in a September 12, 2017, speech by then-Acting Assistant Attorney General in the DOJ’s Antitrust Division, Andrew Finch. Addressing the 11th Global Antitrust Symposium, Finch lauded the “clarity and predictability that come from applying the per se rule to certain well-defined categories of notoriously harmful conduct.” Using the Guidance as a recent example of a bright-line rule, he noted that the Guidance cautions that such prohibited horizontal agreements “are per se illegal and may thereafter be prosecuted criminally.” Finch warned practitioners, “Your clients should be on notice.”

The Guidance followed three recent cases brought by the agencies against several major companies, including eBay, Pixar, and Google. In these cases, the federal agencies obtained consent decrees after alleging that the competitors agreed not to “cold call” each other’s employees about job opportunities. One case also resulted in related private party litigation (In re High-Tech Employee Antitrust Litigation), which received class certification and then settled in 2014 for $415 million. And earlier this year, Disney agreed to pay $100 million to settle claims alleging it colluded through a “gentleman’s agreement” with other animation studios to not recruit/hire each other’s workers. Nitsch v. DreamWorks Animation SKG Inc., 14-cv-04062, U.S. District Court, Northern District of California (San Jose)

Although the Guidance was ostensibly issued to alert human resource professionals to potential violations of antitrust laws, this “alert” clearly extends well beyond the HR sphere, to corporate executives and managers as well. In fact, the Guidance could have significant monetary and criminal consequences for anyone setting, communicating, or enforcing company policies dealing with employee hiring, recruitment, compensation, benefits, bonuses, or any other term of employment.

The impact of the Guidance

Under the October 2016 Guidance, the DOJ and FTC expressly prohibit agreements not to compete in the “employment marketplace.”

To break this down, let’s first consider what the Guidance means by the “employment marketplace.” This market is significantly different than the typically scrutinized output marketplace, which focuses on the relevant products or services produced or sold by a firm.

Most executives are (or should be) aware that they should not discuss prices, allocate customers, or engage in bid-rigging with their product competitors. The Guidance applies beyond such “traditional” competitors, however. As long two companies hire from the same employee pool, the agencies view them as “competitors” and have decreed that it is illegal to limit competition in that market, regardless of whether the two compete in the more traditional “relevant product market” sense.

For example, if two companies both compete for the hiring of marketing personnel, the fact that the companies sell entirely different products or services will not matter for purposes of the Guidance and antitrust enforcement. If they agree to not solicit each other’s marketing personnel, the agencies will consider such agreements to be per se illegal (civil liability) and subject to criminal prosecution.

What sort of agreements are condemned? According to the Guidance:

It does not matter whether the agreement is informal or formal, written or unwritten, spoken or unspoken. An individual is likely breaking the antitrust laws if he or she: agrees with individual(s) at another company about employee salary or other terms of compensation, either at a specific level or within a range (so-called wage-fixing agreements), or agrees with individual(s) at another company to refuse to solicit or hire that other company’s employees (so-called “no poaching” agreements).

Moreover, direct evidence of an agreement is not needed for a violation. An agreement can be inferred from evidence of discussions and parallel behavior. The Guidance specifically warns against sharing sensitive information. Red flags for employment practices could include exchanging company-specific information about employee compensation or terms of employment with another company, even if the exchange setting is a trade association meeting or an informal social event.

The bottom line: Any agreement to limit competition for employees risks attack as per se illegal and criminal conduct. The per se label means the agencies will not look to the agreement’s effects or any low-price intentions: “[I]f the agreement is separate from or not reasonably necessary to a larger legitimate collaboration between the employers, the agreement is deemed illegal .... [However] [l]egitimate joint ventures (including, for example, appropriate shared use of facilities) are not considered per se illegal under the antitrust laws.”

Importantly, per se illegality also comes with severe consequences, beyond the expense of an antitrust lawsuit. While an FTC civil action or an individual action for treble damages can cost a company significant time and money, nothing quite sounds the red alert like the following excerpt from the Guidance:

[T]he DOJ will criminally investigate allegations that employers have agreed among themselves on employee compensation or not to solicit or hire each others’ employees. And if that investigation uncovers a naked wage-fixing or no-poaching agreement, the DOJ may, in the exercise of its prosecutorial discretion, bring criminal, felony charges against the culpable participants in the agreement, including both individuals and companies. (Emphasis added)

Thus, not only could a firm end up paying millions of dollars in treble damages to a disgruntled competitor, but individuals implementing a price-fixing restraint could end up behind bars.

Can non-solicitation agreements be lawful in certain contexts?

The Guidance says very little in that regard, only suggesting that “if an agreement is separate from or not reasonably necessary to a larger legitimate collaboration between employers, the agreement is deemed illegal.” Logically, one could suppose that an agreement would be legal when reasonably necessary to a larger legitimate collaboration, which sounds very similar to the ancillary restraints doctrine. That doctrine has been used to take otherwise per se illegal horizontal agreements into a rule of reason analysis when such agreements are ancillary (necessary) to a larger collaborative venture or merger agreement.

Understandably, some legal practitioners have taken the Guidance language and run with it as an extension of the ancillary restraints doctrine.  While this application is likely appropriate, we recommend an exercise of caution — and that you contact your legal counsel — for several reasons.

First, although often referenced in antitrust literature as having broad application, the ancillary restraints doctrine is, like most antitrust law, nuanced and complex. Also, other earlier guidance from the agencies that approved the doctrine did so in the limited context of joint ventures and mergers. See, e.g., "FTC/DOJ Antitrust Guidelines for Collaborations Among Competitors" (2000) at § 3.2 (referring to a “joint venture entity,” agencies would use rule of reason, not per se rule, to analyze “an efficiency-enhancing integration of economic activity” when the “agreement…is reasonably related to the integration and reasonably necessary to achieve its procompetitive benefits.”).

Second, notwithstanding the above-quoted DOJ consent judgment language regarding arrangements that are “not prohibited,” consent judgments are not binding precedent. They’re binding only on the two parties to the agreement, leaving the DOJ with plenty of room to change its policies, or argue that the “facts are different” in another case.

Third, even if the DOJ adheres to the above consent judgment policies, these provisions still come with some limitations (like specificity and duration). Moreover, “reasonably necessary” is largely undefined and left to discretionary interpretation. The spectrum of this definition is wide-ranging with stark consequences for erroneous predictions regarding the agencies’ future assessments.

Finally, if all of those other reasons were not enough signal caution in implementing a non-solicitation agreement, consider the consequences of being the first to “test out” the agencies’ new pronouncement. Defending any antitrust suit is an expensive load to carry, and here the added baggage of criminal consequences could weigh even heavier on any corporate or individual defendants named in the suit.