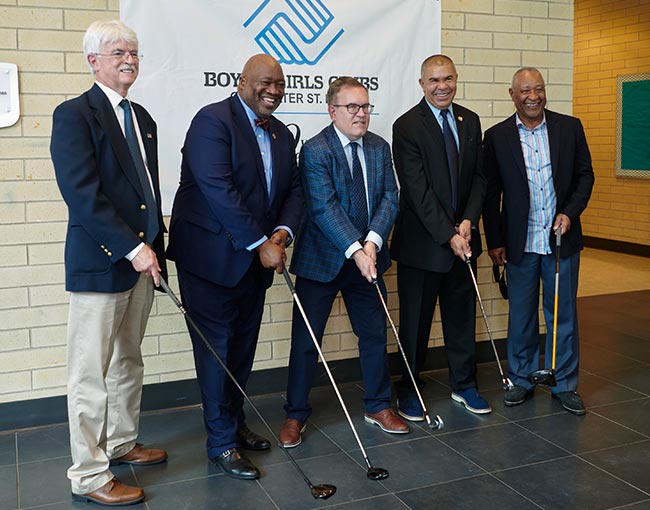 In the next step for a historic environmental justice project in the St. Louis region, yesterday the Boys & Girls Club of Greater St. Louis announced it will partner with the Gateway PGA REACH Foundation to build a youth golf and athletic facility on the site of a former Superfund site.

Thompson Coburn has represented the Boys & Girls Club pro bono in the Club’s nearly decade-long effort to clean up a highly contaminated Superfund site adjacent to its headquarters in North St. Louis.

At a festive (and socially distanced) event at Club headquarters on September 16, EPA Administrator Andrew Wheeler announced the completion of the site cleanup at the former Carter Carburetor factory and signed an agreement to help facilitate transfer of the ownership of much of the site to the Boys & Girls Club.

“Few imagined a polluted former carburetor plant could be transformed into a golf training center for the youth of St. Louis,” Wheeler said. “But with vision and teamwork it happened.”

As part of its partnership with the Boys & Girls Club, the Gateway PGA REACH Foundation will support the Club’s plans to use the former Carter Carburetor site to build a four-hole golf course, driving range, frisbee golf course and a PGA Reach Academy. Parts of the site owned by the St. Louis Land Reutilization Authority will be developed into an urban prairie or community garden.

In 2013, EPA entered into a $35 million settlement agreement with ACF Industries, Inc. to pave the way for the site’s cleanup, building demolition, and ultimately productive reuse. From 2013 to 2020, EPA and ACF removed asbestos and hazardous debris, removed dilapidated buildings and buried and capped PCBs.

“It’s been our honor and pleasure to represent the Boys & Girls Club over the last nine years on this important project for our region,” said Peter Strassner. “It took a lot of time, dedication and grit to get to this point, but this collaboration will ultimately result in the creation of significant green space and recreation facilities for the Club and the North St. Louis community. Our goal was always to create a place where children can play, learn, and enjoy the outdoors, and we’re so glad this project is moving forward in that direction.”