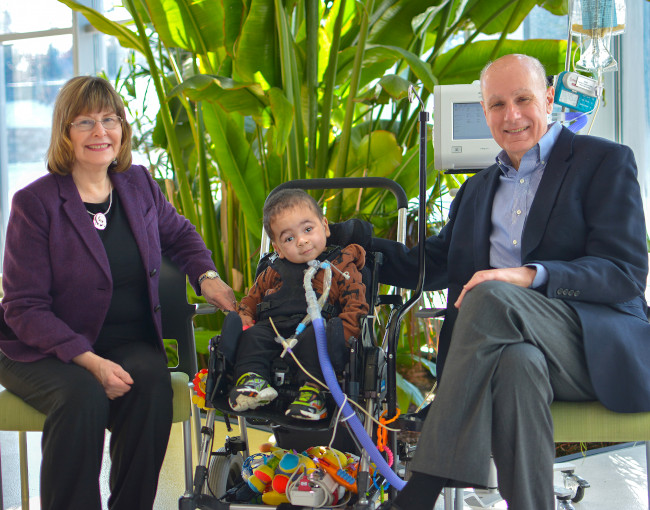 Former Thompson Coburn Chair Tom Minogue and his wife, Becky, have received the 2021 Service to Children Award from St. Louis-based Ranken Jordan Pediatric Bridge Hospital for their nearly 40 years of service to the hospital and its mission.

Named for the hospital’s founder, the Mary Ranken Jordan Service to Children Award honors those who selflessly serve Ranken Jordan, the St. Louis community, and by their example, encourage others to do the same.

Tom and Becky received the award April 9 at Ranken Jordan’s Beyond Gala at Union Station. Thompson Coburn Chair Roman Wuller and Evan Goldfarb, chair of the Firm’s Corporate department, assisted with the award presentation and thanked Tom and Becky for “truly taking on the hospital’s mission as their own.”

Thompson Coburn Corporate Department Chair Evan Goldfarb and Firm Chair Roman Wuller thank Tom and Becky for their service to Ranken Jordan and Tom’s 20 years of service as chair of Thompson Coburn.
Ranken Jordan President and CEO Brett Moorehouse presents Tom and Becky Minogue with the hospital’s 2021 Service to Children Award.
Becky and Tom played a key role in the capital campaign that supported Ranken Jordan’s 2018 expansion, which doubled its capacity to 60 beds and added a three-story, 75,000-square-foot expansion, and additional therapy and recreational space.

“People put time into things they are passionate about,” Roman said at the event. “And nearly 40 years later, it’s evident that Tom and Becky are deeply passionate about furthering Ranken Jordan’s vision to care for kids beyond the bedside.”

Tom first joined Ranken Jordan’s board in 1984 at the request of his Thompson & Mitchell mentor, Joe Logan, himself the longest-serving board president in Ranken Jordan history. Tom became board president in 1993 and over the next decades worked to expand and revitalize the hospital’s board and pursue a new strategic plan. As part of that plan, Tom was instrumental in Ranken Jordan’s transition from a pediatric nursing home to a pediatric bridge hospital focused on caring for children and families with the most complex conditions, illnesses and injuries. A bridge hospital is so-named because it bridges the gap between hospital and home.

“Tom was the right person in the right role at the right time at Ranken Jordan,” said Dr. Nick Holekamp, Ranken Jordan’s Chief Medical Officer, in a feature on Tom and Becky on the hospital’s website. “He is a gifted leader who shepherded the organization beautifully through our transition from a nursing home to a pediatric specialty hospital.”

Tom and Becky also played a key role in the capital campaign that supported Ranken Jordan’s expansion in 2018, which doubled its capacity to 60 beds with a three-story, 75,000-square-foot expansion, an indoor playground, an adaptive outdoor playground, and additional therapy and recreational space.

Inspired by their family passion for books, the Minogues sponsored a library nook in the new building. Becky and one of the Minogues’ daughters, Beth, happily curated books for the colorful library nook that has become a favorite hideaway for kids at Ranken Jordan.

“We feel good about being involved because of the miraculous work Ranken Jordan does with kids,” said Becky.

“Seeing the progress that children make validates everything we do,” Tom says. “No other place can take care of them the way Ranken Jordan does. Lots of hospitals do lots of great things but Ranken Jordan plays a unique and special role. And every single person who has touched Ranken Jordan over the decades deserves huge accolades for that."