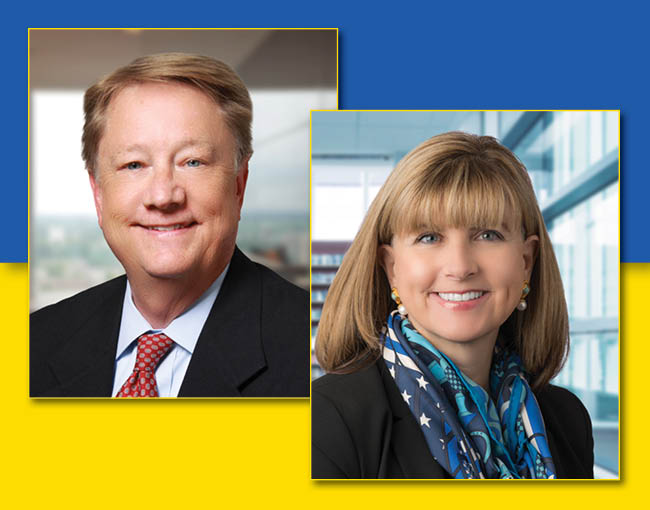 Margaret’s pastor father is fighting on the front lines in Ukraine, leaving her to care for their entire family now in Poland. Slavic’s youngest child was born on the first day of the Russian invasion; his wife delivered the baby in their building’s basement and then the young family immediately evacuated to the border. Yulia had been so busy assisting refugees with her mastery of Ukrainian, Polish and English that she hadn’t had time to stop and process her own trauma. When asked to draw a picture of his home in Ukraine, a five-year old child gripped a  crayon and drew a tank outside the window.

These are some of the people Thompson Coburn partners John and Suzanne Galvin connected with on their 11-day trip to Ukraine and Poland to work directly with refugees and provide training on crisis counseling to instructors and pastors with the Ukrainian Baptist Theological Seminary (UBTS).

“Hurricanes, floods, tornadoes, shootings, terrorist events, war — when those events happen, people attend appropriately to humanitarian needs for food, water, shelter and safety,” said John. “But there are emotional and spiritual things that people are going through during a time of crisis, that sometimes get ignored. What we focus on is filling that gap and training others how to fill that gap.”

The Galvins, both longtime litigators who represent clients in complex litigation across the country, have 15 years of experience providing crisis counseling to people affected by natural and manmade disasters. They have traveled to devastated regions of the U.S., Haiti, Kenya, Iraq, Lebanon, and other locations to sit with survivors, listen, and provide validation and comfort in the wake of sudden trauma.

In Ukraine and Poland, Suzanne and John partnered with the Chesterfield, Missouri-based Ukrainian Partnership Foundation to answer the call of UBTS, which had seen its campuses in Lviv cleared of its usual 1,300 seminary students and professors and filled instead with thousands of Ukrainian refugees headed for the Polish border. Classrooms that instructed would-be pastors in theology are now filled with mattresses, blankets and traumatized, displaced families. Since the start of the war, UBTS has housed 13,500 refugees in Lviv, provided 235 tons of humanitarian aid and supplied 420,000 meal equivalents to displaced Ukrainians.

In late April, Suzanne and John began their trip in Zory, Poland, where host families and churches connected to UBTS had welcomed in thousands of Ukrainian families.

“The Polish people have set the bar high for the rest of the world for how to deal with refugees,” said Suzanne. “There are no refugee camps at the border, despite millions of people being on the move. And with the men left behind to fight, it's mostly women and children traveling, an especially vulnerable population. The Polish people have welcomed refugees from a different country, culture and language into their homes — with no end date to the situation in sight. They are remarkable.”

After seven days in Poland, the Galvins traveled by van to Lviv, the largest city in western Ukraine and a target of Russian hostilities. Leaders at UBTS say they are the last seminary standing in all of Ukraine, including centuries-old monasteries that have been destroyed by Russian missiles.

In Lviv, John and Suzanne held two all-day workshops for UBTS staff, instructors and pastors to provide training on how to minister to people in crisis. In emailed updates to friends and family back home, the Galvins reported that the teaching had been well-attended and well-received.

“These folks have been going 100 mph for 68 days now, and dealing with significant trauma of their own,” Suzanne wrote. “It’s nice to know that if we train 30 people they will likely assist 3,000.”

One focus of their instruction is how to respond to the painful “why” questions that traumatized people ask of their religious leaders in the wake of a crisis.

“People are looking to them for answers, and they’re used to their pastors and professors having answers,” said John. “Theologically, I can tell you why bad things happen to good people. But when you’re in the midst of a crisis, you don’t want to hear an intellectual answer. Sometimes the best you can do is to say, ‘We don't know why this is happening.’ But you can also share that Jesus told us in this life you will have trials. We don’t have to be afraid when that happens because he will comfort us in all things.”

On the final night of their trip, John and Suzanne gathered with their colleagues and hosts for a dinner on the suburban outskirts of Lviv. Halfway through the meal, the Ukrainians in their party started looking at their phones and exchanging worried comments. Several Russian missiles had penetrated Ukraine’s air defense systems and bombed a train station near the restaurant where the group had originally planned to gather that night. As they left dinner and stepped into the cool evening, John and Suzanne could see smoke rising from the horizon.

“After a short period of time, even major world conflicts fall off the front page of news sites, and we sort of forget about it,” said John. “But this is still happening for the Ukrainian people, and they're going to continue to struggle. It will be a long time before they can return home. And whenever that is, home isn't going to be normal. There is no normal anymore.”

If you’d like to support UBTS efforts to aid Ukrainians and minister to refugees across Ukraine and Poland, you can donate here.

“The people of Ukraine really captured my heart,” said Suzanne. “It's hard to imagine that they're continuing to live like that day after day without a break. It makes you thankful for the relative safety and security we have here.”