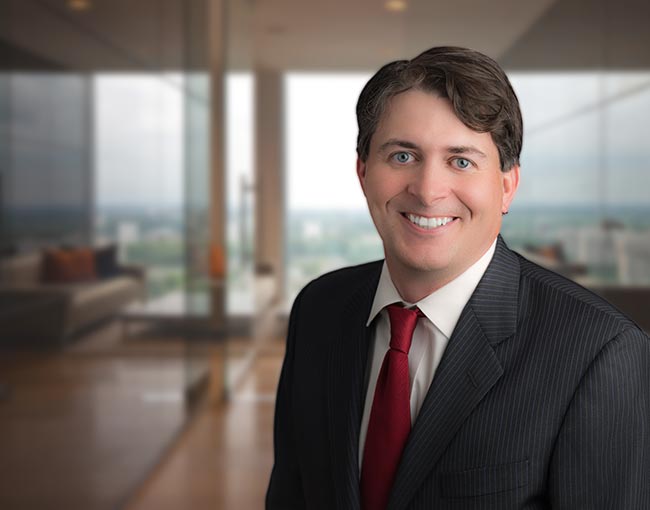 John handles a wide variety of commercial litigation in state and federal courts across the nation.

John has tried jury trials and bench trials in Missouri, Illinois, New York and other states (involving issues ranging from patent infringement to civil conspiracy). He has briefed and argued appeals in federal and state appellate courts and in the Supreme Court of Missouri.

A first-chair trial lawyer, John is a vigorous and resourceful advocate. He works closely with his clients through all stages of litigation to understand the core issues of each dispute and to develop and deploy litigation strategies to efficiently achieve their goals.

John is a Senior Fellow in the Litigation Counsel of America, a peer-selected honorary society for trial lawyers representing less than one-half of one percent of American lawyers. Fellows are selected based upon excellence and accomplishments in trial work and superior ethical reputation. John is also a member of the Diversity Law Institute, a nonprofit international association of lawyers and law firms committed to diversity in all aspects of the legal profession and justice systems of the United States and Canada.

Suing on behalf of hundreds of Missouri municipalities, the City of Maryland Heights sought back taxes on TracFone's wholesale and resale sales of prepaid wireless service. TracFone and the class reached a mutually agreeable settlement after TracFone obtained summary judgment against the class on all claims for back taxes on wholesale sales.

Opting out of the class action lawsuit, the City of Springfield likewise sued TracFone for back taxes. In similar tax litigation, Springfield traditionally received a substantial individual-settlement premium in excess of its projected payments as a class member. The TracFone lawsuit proceeded to trial on the issue of damages after TracFone refused to pay Springfield's typical premium.

John sat first chair in the Springfield trial, which was the first in the nation involving an adjudication of the proper methodology for identifying internet access charges among bundled services under the Internet Tax Freedom Act. The final judgment was roughly half of TracFone's last settlement offer (and an amount substantially below the City's projected recovery had it not opted out of the class).

John first-chaired a two week jury trial on behalf of Philadelphia-based SupplyOne, Inc. in Statesville, North Carolina. SupplyOne had been sued by a local manufacturer seeking roughly $4 million dollars for alleged antitrust violations, breach of contract, and fraud. At trial, the jury sided with SupplyOne, finding the defendant was actually owed more than $70,000. After the plaintiff appealed, John successfully argued his client's case to the United States Court of Appeals for the Fourth Circuit. Ultimately, the plaintiff that sued SupplyOne for $4 million was forced to pay SupplyOne more than $350,000.

An Ohio manufacturer sued Bunzl in Toledo, Ohio, for patent infringement. John joined the trial team shortly after the presiding judge found (in the context of a preliminary injunction decision) that there was a "substantial likelihood" that the plaintiff would prevail on its patent claims at trial. After a two-week trial, the jury reached a different conclusion—returning a defense verdict on all eleven counts of plaintiff's patent infringement claim.

Although his focus is commercial litigation, John has at various times represented minority shareholders seeking to exit closely held corporations. In the last three instances, his investigation uncovered management misconduct that artificially depressed the value of his client's ownership interest. In all three instances, after the shareholders filed suit based on the misconduct revealed by John's investigation, their recovery was more than quadruple the originally proposed buyout price. Disclosure of the parties' identities is precluded by the terms of the applicable settlement agreements.

Nuts and Bolts of Attorney Client Privilege: What is it, when it applies and when it may be worth waiving June 1, 2022