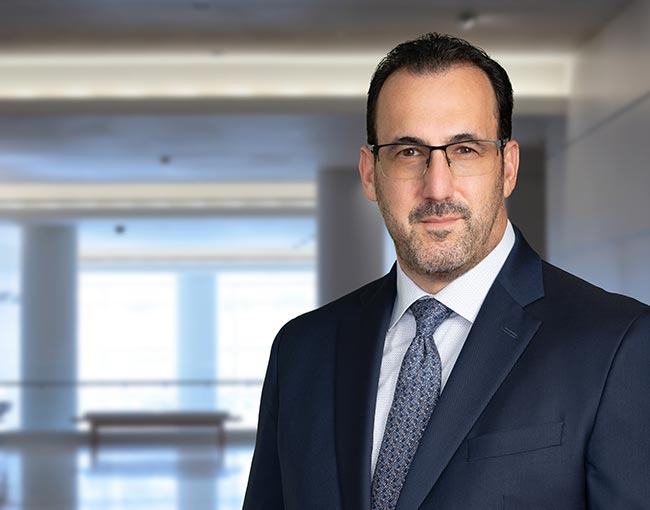 Zachary delivers practical, tactical, and experienced advice to corporate, lending, and fiduciary clients with respect to all phases of litigation, alternate dispute resolution, and pre-suit evaluation.

Zachary also serves as a Vice-Chair of Thompson Coburn's Business Litigation Group, and is a member of the Firm's Compensation Committee.

For over 25 years, Zachary has established himself to be the one you want with you, and on your side, in and outside of the courtroom. He has successfully litigated a wide array of matters involving many industries and jurisdictions, and, although based in New York City, he often is asked by his clients to serve as lead counsel elsewhere and he has done so in such jurisdictions as Arkansas, California, Connecticut, Delaware, Florida, Georgia, Indiana, Massachusetts, New Hampshire, New Jersey, Pennsylvania, and Texas. These experiences include Zachary trying cases to jury verdicts and bench rulings in numerous courts. He also has extensive alternative dispute resolution experience, focused on pre-suit evaluations, negotiations, and mediation.

Zachary also has served as a court-appointed receiver or counsel thereto, including in such matters involving a multi-million dollar art liquidation with one of the world's largest fine art auction houses and a multi-million dollar phishing fraud that induced investors and resulted in the CEO pleading guilty to securities fraud and wire fraud.

Zachary currently serves on the governing Council of the American Bar Association's Section of Litigation. In this capacity, he helps establish policy and guide the Section, one of the ABA's largest and most active groups, and the premier organization for trial lawyers in the United States.

Successfully defeated a second successive summary judgment motion on multi-million dollar claims brought under the UCC and contract claims on behalf of the largest privately held food importer in the United States. (2021)

Secured an appellate ruling upholding the violation of a filing injunction and affirmed award of costs and attorney's fees. (2020)

Secured the voluntary dismissal of an action on behalf of one of the largest retail salvage companies in the United States following argument on application to dismiss or transfer based on forum non conveniens. (2018)

On behalf of a corporate fiduciary secured an appellate court's affirmances of underlying discovery orders and limitations on depositions imposed by the trial court. (2018)

Secured a judgment on behalf of the largest privately-held food importer in the United States against a vendor for delivering non-conforming merchandise and breach of contract. (2018)

On behalf of a banking client, defeated the plaintiff's summary judgment motion and secured dismissal of plaintiff's complaint alleging, among other things, unlawful trade practices, breach of contract, and promissory estoppel. (2017)

Secured an appellate ruling that dismissed a petition for writ of prohibition in connection with a contested accounting proceeding for an institutional trustee. (2017)

On behalf of an aircraft lessor secured an affirmance and ruling that extended safe harbor to the lender prior to the actual repossession of collateral. (2011)

On behalf of an institutional trustee, secured an appellate ruling that reversed and remanded a fee award to petitioners in Article 77 and 81 proceedings and affirmed the trial court's factual findings against petitioners (2011)

Successfully achieved summary judgment in lieu of complaint for a commercial lender. (2010)

Enforced a bank client's rights in a $50 million loan facility and upheld an ex parte seizure of collateral and an ex parte order of attachment. (2019)

For a specialty lender, successfully defended lender liability claims and upheld the post-default disposition of collateral. (2008)

Secured an appellate decision that upheld a bank's rights to collect from guarantors. (2004)

Secured an appellate ruling that affirmed fraudulent conveyance trial findings with respect to a NYC townhouse. (2003)

Won summary judgment for a financial services client on conversion of receivables and upheld the UCC prohibition against disposition of inventory collateral except in the ordinary course of business. (2002)

Co-Author, “The Anatomy and Proliferation of Fraud-Based Lender Liability Claims,”
Journal of Taxation and Regulation of Financial Institutions May/June 2014

Author, “Mark Califano of American Express Answers All Our Questions, And for only 25,000 membership rewards points,”
American Bar Association December 2013

Co-Author, “I’ve Been Sued for What? Fiduciary Duty Claims Against Hedge Fund Managers and How to Avoid Them,”
HedgeCo.Net August 2013

“In-House Spotlight: All Things In-House at the Auction House with Jonathan Olsoff, worldwide director of litigation at Sotheby's and leader in the auction world, discusses his in-house practice,”
American Bar Association September 2011

“The Reliability, Admissibility, and Power of Electronic Discovery,”
The Committee on Pretrial Practice & Discovery Fall 2010

“Piercing the Corporate Veil & Turning the Judgment into Money CLE,”
The Rossdale Group 2014