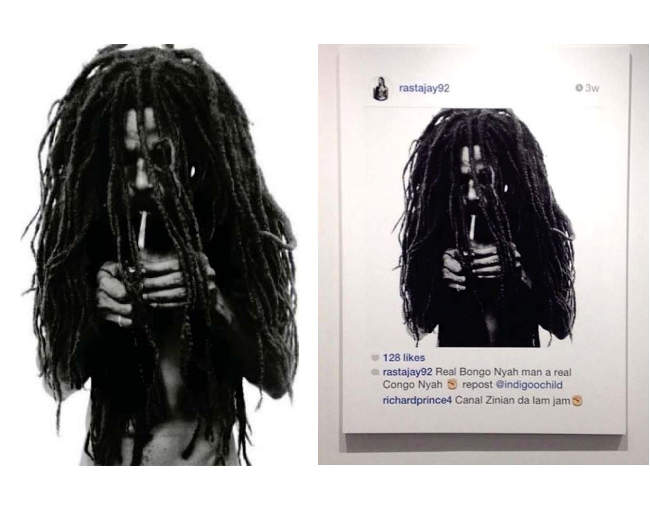 Adding an Instagram border and a few “gobbledygook” notations to an original photograph is not transformative as a matter of law. In an update to our post on a case filed last year, a federal court in New York recently denied appropriation artist Richard Prince’s motion to dismiss Donald Graham’s copyright infringement lawsuit. Graham sued Prince for infringement, claiming Prince copied his photograph, “Rastafarian Smoking a Joint,” in order to create Prince’s work, “Untitled (Portrait).”

In his motion, Prince suggested the court could determine the transformative nature of “Untitled (Portrait)” as a matter of law by performing a side-by-side comparison with “Rastafarian Smoking a Joint.” According to Prince, once the court made that determination, it would compel a finding that the other fair use factors also weighed in his favor.

Judge Sidney Stein however determined that “because Prince’s Untitled does not make any substantial aesthetic alterations to Graham’s Rastafarian Smoking a Joint, a simple side-by-side comparison of the two works is insufficient” to make the transformative determination. The court invited readers of his opinion to perform their own comparison and note that Prince did not alter Graham’s original photograph or its composition, presentation, scale, color palette, or media.

Because he could not make the transformative determination, Judge Stein found the remaining Section 107 fair use factors either could not be fully evaluated in the absence of fact discovery (Factors 3 and 4 - amount and substantiality, and effect on potential market), or actually favored Graham (Factor 2 - nature of work).

Judge Stein also denied Prince’s alternative request to convert the dismissal motion into a motion for summary judgment because “discovery will be necessary to uncover evidence about the purposes and circumstances under which each of the allegedly infringing works were created, to ascertain whether certain of the works were commercial in nature, and to identify the markets for Graham’s and Prince’s works.”

In the absence of a settlement, the case will now proceed through the usual fact discovery process. Judge Stein’s opinion is another reminder the fair use defense is often best decided on a full evidentiary record.