Since the FAA granted the first Section 333 Exemption on September 25, 2014, potential commercial unmanned aircraft system (“UAS” or “drone”) users have eagerly monitored the agency’s progress. Let’s review the first 200-day period of UAS Exemption grants, and look ahead to what the evolving process might mean for businesses hoping to use drones in the next few years. What do the numbers say about how companies want to employ UAS?

Low-risk, controlled-environment commercial drone operation applications typically go through an exemption process (known as a Section 333 Exemption, named after the authorizing provision in the FAA Modernization and Reform Act of 2012) to become approved for use. On February 15, 2015, the FAA released its small UAS ("sUAS") noticed of proposed rulemaking (“NPRM”), which would establish new rules for the operation of drones under 55 pounds and make it somewhat easier for businesses to operate drones. But until those rules become final (which could be several years from now), the Section 333 Exemption process is the best way for commercial users to get airborne.

To date, private companies, public utilities, academic institutions, and individuals have submitted more than 700 Section 333 applications. The nearly 150 granted exemptions sketch an interesting profile of commercial drone use in America. 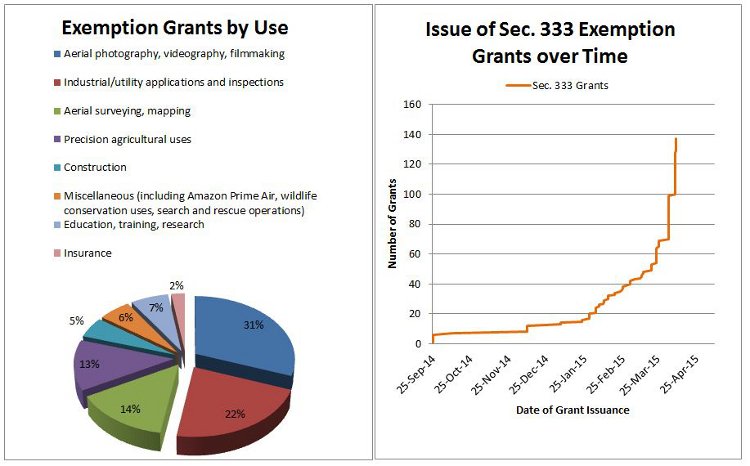 This picture is instructive for a number of reasons. First, it highlights which businesses presently take advantage of UAS technology and which industries have yet to jump on board. Product delivery services are noticeably absent from the granted exemptions (except for Amazon Prime), although there’s little evidence to indicate the FAA has denied grants on the basis of that proposed use alone. Second, the profile of granted exemptions also suggests which important secondary markets for drones we can expect to emerge in the years ahead. Advanced photography and videography camera manufacturers, developers of mapping and surveying software, advanced avionics and flight control developers, and makers of industrial inspection instruments and sensors all appear well-placed for future growth, in addition to the coding and programming underlying standard drone software.

What’s more, the grant process is gaining significant momentum, with approximately two thirds of all Section 333 grants coming in the last 60 days. The FAA’s rate of review has improved in part because the agency has started using a “summary grant” process whereby it determines if new Section 333 applications mirror (to a large degree) the applications of other similarly-situated entities that have already been approved.  If they do, the FAA may rely on the prior analysis in granting the new application. This streamlined procedure has produced a remarkable spike in the issuance of Section 333 grants, a trend that is likely to continue as more applications pour into the FAA. In other words, if your business’s contemplated drone use mirrors an FAA-approved analogue, chances are good that your Section 333 application will encounter less turbulence during a review.

Now may be the best time to get your business cleared for takeoff with the FAA.