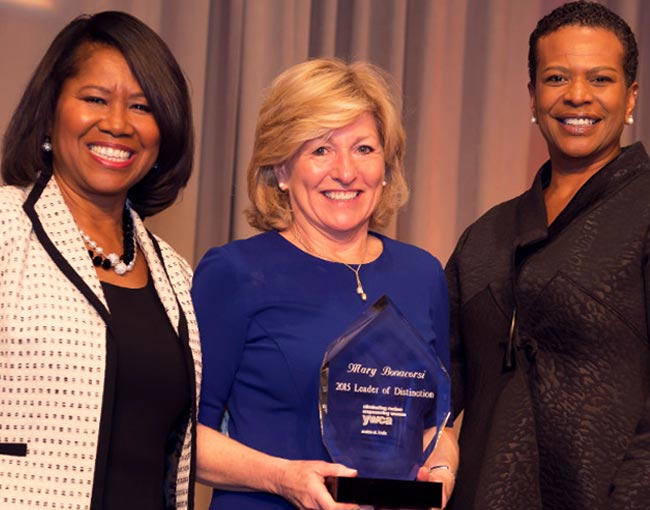 Thompson Coburn partner Mary Bonacorsi was honored last week by the YWCA of Metro St. Louis as one of the organization’s 2015 Leaders of Distinction.

The honor, which the YWCA has given out since 1979, recognizes the “special achievements of women in the workplace and community.” Past winners have included educators, nonprofit leaders, entrepreneurs, executives of the region’s largest businesses.

Mary has served as a partner in Thompson Coburn's Business Litigation Group for 30 years. She has served as lead counsel in more than 75 jury and non-jury cases and is a member of the American Board of Trial Advocates. Her trial experience includes disputes of all types, including general commercial litigation defense and real estate and construction claims.

As one of Thompson Coburn’s first female attorneys, Mary played a fundamental role in the creation of Thompson Coburn’s Total Commitment® Women’s Initiative, a comprehensive program that focuses on helping the firm’s women attorneys meet their full potential and promoting their achievements and contributions. Mary led the strategic planning for the Women’s Initiative, organized Steering Committee events and pushed for the expansion of the firm’s formal mentoring program, as well as serving as a mentor over the years to numerous women partners and associates.

“Every single female lawyer at our firm — and we have over 100 — stands on the shoulders of Mary Bonacorsi,” said Thompson Coburn Chairman Tom Minogue in a video (at right) that was played at the Dec. 10 event.

In the same video, Mary reflected on her role as a mentor for dozens of women attorneys at the firm. “Since I was given those opportunities, it’s just natural to want to pass them on. And as a lawyer and a mom, I really, really enjoy watching people grow and develop and do terrific things.”

“You can’t all be president, but you can always be a leader in your own little sphere of influence,” Mary said. “It’s about service to something bigger than yourself.”