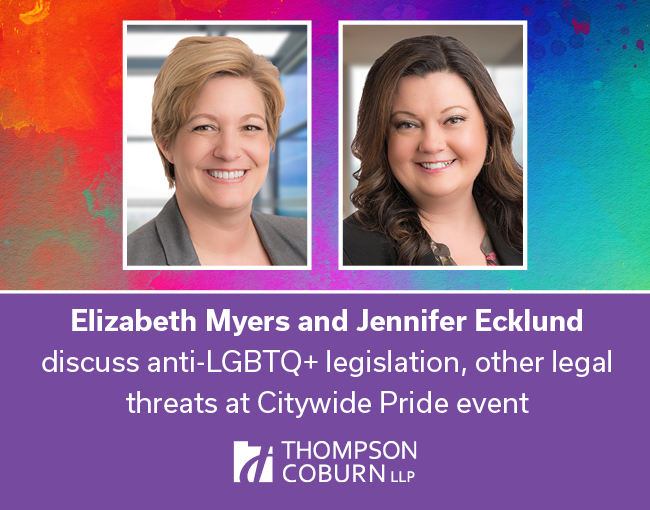 Late last month, Thompson Coburn partners Elizabeth Myers and Jennifer Ecklund led a webinar on regressive policies appearing across the United States, including challenges to workplace protections for LGBTQ+ employees, attacks on marriage equality, uneven approaches to transgender and nonbinary rights, and other civil rights issues as part of a Citywide Pride program offering. Attendees learned what these challenges consist of and how they, and their organizations, can help.

Elizabeth and Jennifer, both based in Thompson Coburn’s Dallas office, are married to each other and have spent more than 15 years advocating for human rights through litigation. The pair shared insight about the unprecedented amount of anti-LGBTQ+ legislation passed this year and how it relates to other legal challenges to human rights via a virtual panel co-hosted with Citywide Pride, a collective of LGBTQ leaders from companies and law firms across Chicago. Thompson Coburn Business Litigation Associate and LGBTQ+ Affinity Group Co-Chair Drew Moore helped organize the event.

"The same groups taking on critical race theory are taking on reproductive rights and the public-school system," Jennifer said. "These are all the same people employing the same strategies, so these issues are intertwined. As a group of people who want to protect the gay community, we have to coalesce around other marginalized groups and stand together."

Although the majority of U.S. residents support LGBTQ+ people, Elizabeth said 283 anti-LGBTQ+ laws were filed in the first quarter of 2022. Some of these laws prevent school personnel from speaking about LGBTQ+ people, restrict trans children from playing sports and criminalize gender-affirming care, among other things. She explained that Texas tends to serve as a "testing ground" for these kinds of restrictive laws where politicians try out different forms of messaging to see what's effective.

In light of the U.S. Supreme Court's decision to overturn Roe v. Wade, Jennifer said she expects red states to start trying to enforce laws that go against other human rights protected by the same constitutional reasoning used in Roe v. Wade. "Your voices are incredibly important to these fights no matter where they're occurring," she said.