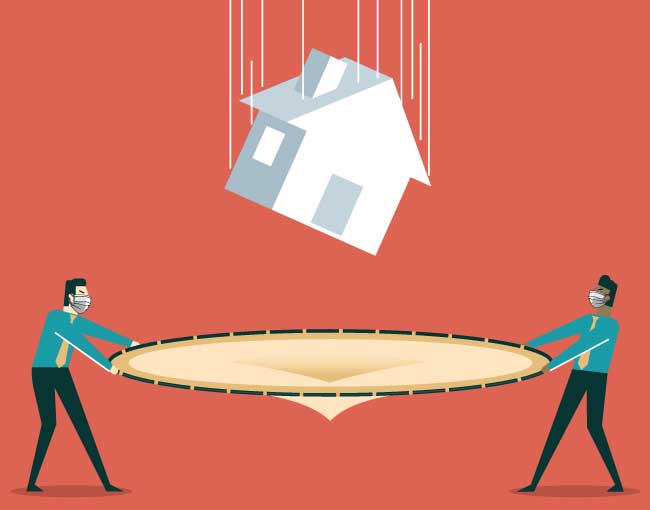 Can government actions restrict creditors’ remedies during the COVID-19 emergency?

As the economic fallout associated with the COVID-19 virus continues, many cities and states have already suspended a landlord’s ability to evict delinquent tenants. (The National Low Income Housing Coalition is tracking these suspensions.) These actions, coupled with similar directives on evictions and perhaps foreclosures that will be implemented in the coming days, raise an important constitutional question. Can state and local governments alter creditors’ contractual rights consistent with the U.S. Constitution’s Contracts Clause? The answer under current U.S. Supreme Court precedent is “yes.”

In this post, we’ll revisit the interesting judicial history of this question, which traces its roots to the economic and social upheaval caused by The Great Depression, a global event that might be rivaled by the extraordinary changes wrought by the current pandemic.

The Contracts Clause, located in Article I, § 10 of the United States Constitution, says “[n]o state . . . shall pass any . . . Law impairing the Obligation of Contracts.” The drafters had the rights of creditors specifically in mind when they included the Contracts Clause. The original purpose of the Contracts Clause was “to remedy a particular social evil — the state legislative practice of enacting laws to relieve individuals of their obligations under certain contracts — and thus was intended to prohibit States from adopting as their policy the repudiation of debts or the destruction of contracts or the denial of means to enforce them.” Keystone Bituminous Coal Ass'n v. DeBenedictis, 480 U.S. 470, 503, (1987). In short, the Contracts Clause permitted parties to rely on the state of the law at the time the contracts were signed.

The Great Depression, however, caused the Supreme Court to revisit the limits of the Contracts Clause. In the early 1930s, many states passed laws suspending a creditor’s right to exercise its contractual remedies, such as foreclosing on its collateral or suing on a deficiency claim. Some creditors protested, arguing that both the debtor and the creditor understood at the time the loan documents were signed that the creditor could foreclose or sue if the borrower defaulted, and that the new statutes limiting those, and similar remedies, violated the Contracts Clause. The first case on this subject to reach the U.S. Supreme Court was Home Bldg. & Loan Ass'n v. Blaisdell, 290 U.S. 398 (1934). At issue was a Minnesota statute, passed after the state legislature declared an economic emergency, permitting a borrower to request from a state court a stay of foreclosure for up to two years or to extend the previous one-year post-foreclosure sale redemption period for up to two more years. The statute specifically said it would apply only “during the continuance of the emergency” and in no event beyond March 1, 1935.

The borrowers in the Supreme Court case, Mr. and Mrs. Blaisdell, owned a 14-room boarding house, in which they lived in three rooms and rented out the remaining rooms. After the Blaisdells defaulted on a promissory note, the secured creditor foreclosed on the boarding house and purchased it at the foreclosure sale. Under the Minnesota law in place at the time the mortgage was originally signed, Mr. and Mrs. Blaisdell had one year from the foreclosure sale to pay off the mortgage in full and redeem the property. However, the Blaisdells were unable to pay the mortgage in full and a few weeks before the one-year redemption deadline they filed a request under the emergency statute to continue the post-sale redemption period another two years. The local court granted the extension so long as the Blaisdells paid $40 per month to the secured creditor. The secured creditor appealed, arguing the Minnesota statute violated the Contracts Clause and should be declared unconstitutional.

The Supreme Court ruled in favor of the Blaisdells and upheld the Minnesota statute. It based its decision on a state’s ability to exercise its inherent police power to protect the “lives, health, morals, comfort and general welfare of the people.” Notably, the Court said this “reservation of the reasonable exercise of the protective power of the state is read into all contracts,” thereby creating a kind of implied term in all contracts. The Blaisdell Court concluded there is no constitutional barrier in “directly preventing the immediate and literal enforcement of contractual obligations by a temporary and conditional restraint, where vital public interests would otherwise suffer.” Other similar cases reached the Supreme Court during the 1930s and 1940s, but the Court consistently found that the state’s inherent police powers could alter the terms of a private contract so long as there was a real emergency, the restrictions were reasonable in light of the emergency and the restrictions were temporary.

The Contracts Clause has not been frequently litigated much in the past several decades, but Blaisdell remains good law. As recently as 2018, a majority of the court refused to strike down a Minnesota statute that altered the terms of insurance policies upon the divorce of one of the beneficiaries. Sveen v. Melin, 138 S.Ct. 1815 (2018). However, Justice Gorsuch, in dissent, appeared ready to restrict the police power “exception” to the Contracts Clause.

Unless and until the Supreme Court stakes out an entirely new position on the Contracts Clause, the lower courts are likely to uphold any COVID-19 related restrictions on the exercise of creditors’ remedies.